Aston Martin AMR21 from resin by Spark in scale 1:18 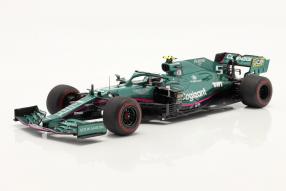 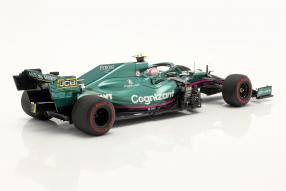 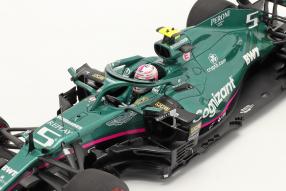 The Aston Martin AMR21 is the first car from the Aston Martin Formula 1 team, which was also reported under the name Aston Martin. Color wise, Aston Martin Racing relies on a color with the british racing green that is already traditional with the luxury manufacturer from England. In addition to black accents, the pink of sponsor BWT at the front wing and on the sides of the vehicle is very noticeable.  The Spark model is made of high-quality resin and is based on the AMR21 that started at the Bahrain GP on March 28th, 2021, piloted by Sebastian Vettel. The model with the starting number 5 in scale 1:18 is also delivered in a british racing green packaging and is based on the original as closely as possible.

The AMR21 is based on the RP20 from Racing Point from the season 2020. The RP20 that had a Mercedes engine like the AMR21, was thus called "pink Mercedes". Since the regulations have been adjusted in 2021, the Aston Martin AMR21 is mostly a further development of the RP20. As usual, the team modified the air deflectors and the wind deflectors before the season. The AMR21 is powered by a turbocharged 1.6 liter V6 engine from Mercedes in combination with a 120kW electric motor. In addition to the accelerator and brake pedal, Sebastian Vettel's Aston Martin has no other pedals. There is a clutch lever on the steering wheel for starting from a standstill. Gear changes while driving are carried out using paddle shifters on the steering wheel.

After a longer stagnancy at Ferrari, Sebastian Vettel has changed to Aston Martin in the season 2021. So, the AMR21 is Vettel's new company car for 2021. Sebastian Vettel, who propagates a very special driving style with very aggressive steering maneuvers and high cornering speeds, hopes the AMR21 will provide a car that meets these requirements. In the first few weeks after his arrival at Aston Martin, the four-time world champion was welcomed with open arms by the team's engineers with his suggestions for vehicle optimization. After fourth place last season, a podium finish in the team standings is the declared goal for 2021 at Aston Martin. In addition to Sebastian Vettel, the AMR21 is also driven by team-mate Lance Stroll. 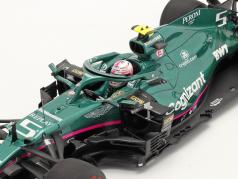 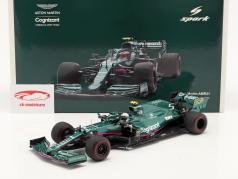