11.11.2021Audi’s already fourth new edition of the RS6, one of the fastest family estate cars one could buy. 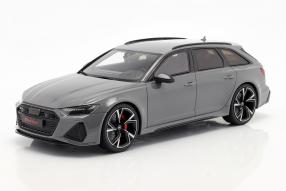 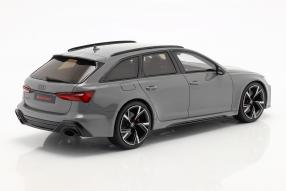 In terms of estate cars, the Audi RS6 is the strongest vehicle that one could buy in the model range of Audi. The Audi RS6 C8 is now the fourth edition of the family estate car with racing genes, which the manufacturer from Ingolstadt implemented in its range under the name RS6 for the first time in 2002. The model from GT-Spirit comes in the very popular color nardo grey and is produced from the high quality material resin. The RS6 C8 in 1:18 is limited to a number of 1,600 pieces. GT-Spirit replicated all details as best as possible so that this model is a proper eye catcher and a true to detail replica of the big role model.

The first Audi RS6 was presented at the Geneva Motor Show in 2002 based on the A6 C5. The turbo-charged V8 engine, which was installed into an Audi for the first time, developed 450 hp. At that time like today, the RS6 differs from the series A6 through wider fenders, wider side skirts, changed front and rear bumper and its oval, double flow exhaust system. In 2008 the C5 was followed by the C6. The C6 received a V10 engine with 5 liters displacement and an output of 580 hp. The third generation followed in December 2012 with the RS6 C7. In the C7, the bi-turbo-charged V8 engine found its place in the front again. The consumption of the all-wheel drive RS6 could be reduced to only 9.8 liters / 100km through various measures. The C7, which was sealed off at 250 kph, accelerated from 0-100 in 3.9 seconds.

The fourth generation of the RS6 has been available in the form of the C8 model since 2019. As with the C7, the C8 is only sold as an Avant. The RS6 version of the C8 is very different from the normal version of the A6. Only the roof, the tailgate and the front doors were taken over from the standard A6. Otherwise, Audi has dug deep into the bag of tricks of its own range of models. The headlights come from the A7, the frameless grille is based on the R8. The engine has remained with the V8 of the previous model. However, this was supplemented by a mild hybrid drive. The power increased again, so that the C8 now delivers 600 hp and accelerates from 0 to 100 in 3.6 seconds. 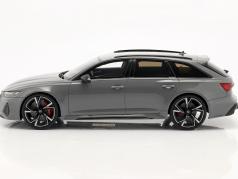 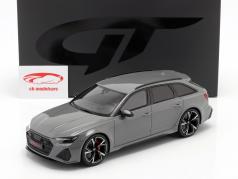