08.11.2021KÜS Team Bernhard at the Nürburgring to the ADAC GT Masters finale 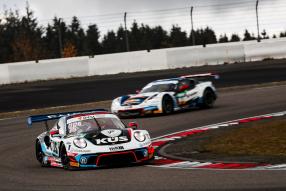 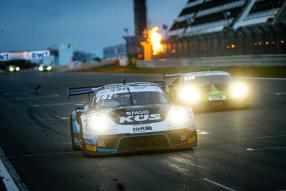 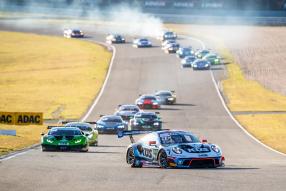 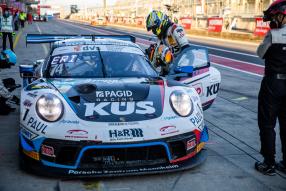 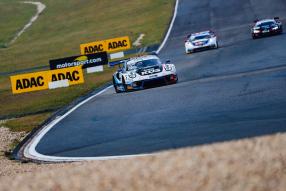 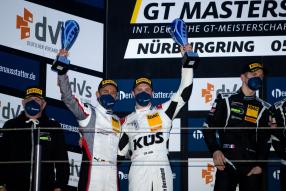 The KÜS Team Bernhard celebrated the second podium in a row in the penultimate race of the ADAC GT Masters season at the Nürburgring. The reigning champion Christian Engelhart (34, Starnberg) and Porsche works driver Thomas Preining (23, Austria) finished third in the Porsche 911 GT3 R with the starting number 75 on Saturday. The sister car with starting number 74 under Joel Eriksson (23, Sweden) and Marco Holzer (33, Bobingen) also crossed the finish line in 14th place.

In the race, straight away in turn one a chaos arose. While Christian got through without any wounds, Joel had to go a long way to avoid further disaster, which cost him several places. In the front Christian then fought his way up to fourth place until the mandatory pit stop, Joel drove in 13th place at the beginning of the pit stop series. Thomas was third with the #75 after the driver change and was able to secure this podium position with a faster and flawless drive to the finish defend. Marco was 15th after the pit stop window was closed, but after tough battles for positions with position 14 in the “League of Super Sports Cars” he still fought for two championship points for the team from the Palatinate Landstuhl.

# 75
Christian Engelhart: “Today it was an almost perfect race after a qualification in which we were only able to drive half of the session due to an unexpected technical problem. Accordingly, we didn't have the right tire temperature to be further ahead. We made up real ground in the race. After the start, I was able to bypass the mess in the first corner on the outside lane and then sorted into P4. I even had better pace than the cars in front of me and was able to attack. At the pit stop we gained another position with an overcut and Thomas was able to safely take third place home. I think with a better qualifying there would have been even more today. I am extremely satisfied with the work that has been done over the past few weeks. We have shown that we can always fight in the top five. It's really fun that way, we can build on that and hopefully add one more tomorrow."

Mixture of feelings on Sunday. Frustration over the no-fault early end for the Porsche 911 GT3 R with the number 75, joy over the best result of the season thanks to the sister car with the number 74: Joel and Marco fought for second place for the team from the Palatinate Landstuhl.

The qualifying in the moring was postponed due to adverse weather conditions by one and three quarters of an hour and extended by 30 minutes. Under these conditions it was a proper challenge. But Marco and thomas secured very good staring positions with five and six for the last season race of the German GT-Championship, which however ended after a few meters for thomas. He was involved in a collision through no fault of his own and had to pit his damaged car and give up the race. Christian wasn't used like that at all.

Due to a further accident, the race was then interrupted with the red flag. At the restart everything went well, Marco handed over to Joel in fourth. But he only looked shortyl at the people in front of him and overtook two competitors with a remarkable action in the combination of curves after the start and finish and settled in second place, which he was then able to defend confidently to the finish.

# 75
Thomas Preining: “Of course I am very disappointed. The race had started well and I was able to make up two positions at the start. We were definitely on course for the podium, unfortunately we were then torn out of the race through no fault of our own. There was a lot in there today. But that's how racing can be."

# 74
Joel Eriksson: “What a day, what a weekend. Yesterday we had a lot of bad luck in the race, we reset everything for today. Marco drove a great qualifying this morning in difficult conditions and placed our car in fifth place. He had a great stint in the race. A Porsche and a Lamborghini fought in front of me and I waited for the opportunity to overtake both. I took the first opportunity straight away and was second. Towards the end of the race, I mainly took care of the tires. A big thank you goes to the team, we've had great pace every weekend since the Lausitzring, everyone has done a great job."

Marco Holzer: “The qualification started well with fifth place. Unfortunately, we weren't quite optimal in traffic, otherwise it might have gone even further. But P5 was okay. The first two laps it was difficult to get the tires up to temperature in the cold. In turn 1 I had a touch, but I was able to stay out of the rough and hand over to Joel on P4. He then drove a great race with the great overtaking maneuver. I would like to thank the entire KÜS team Bernhard, the car was always top from Thursday on. I am overjoyed that we are going into the winter break in second place."

Team boss Timo Bernhard: "A great result with position three yesterday for our starting number 75 and position two today with our #74. Speed-wise, we could have definitely won the race. Unfortunately, Maro Engel crashed out #75 with Thomas already in turn three and pushed him into another competitor. Thus one car was out in no time. The #74 then pulled the coals out of the fire with a strong performance, Marco and Joel achieved second place. We didn't have an easy season at the beginning, but the knot broke in the second half of the season with four podiums and several top five finishes. Many thanks to everyone in the team, especially to my parents and family, as well as to all drivers and partners who managed to do this together with us. That was really strong."