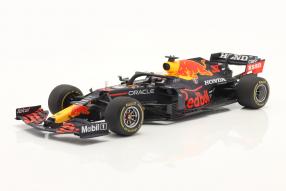 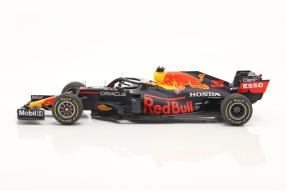 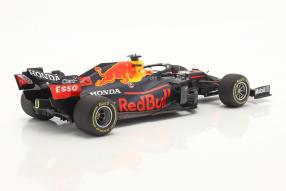 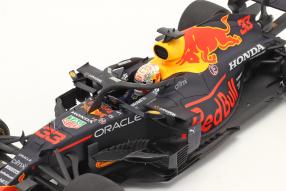 On April 18th, 2021, the Emilia Romana Grand Prix took place in the Autodromo Enzo e Dino Ferrari. The race was actually no longer planned for 2021 in the original version of the racing calendar. However, due to the corona pandemic the racing calendar has been revised and the race has been moved to the place of the calendar where the Chinese Grand Prix would actually have taken place. Before the race in Italy, Max Verstappen was 7 points behind the leader Lewis Hamilton. Overall, one can speak of a very turbulent, sometimes chaotic race weekend. After the first free practice session was interrupted due to a collision between Ocon and Pérez, the second free practice session was canceled three minutes before the end after an accident by Leclerc. The third free practice session, which was also briefly interrupted due to an accident, then belonged to Max Verstappen, who set the fastest time of 1:14.958 here.

In the race, Verstappen secured the lead very early. Directly after the start, he positioned his car next to Lewis Hamilton, who had to drive through the run-out zone after a contact. After Max Verstappen briefly dropped to third place after a pit stop on lap 27, he then demonstrated a very consistent performance that should pay off in the end. In addition, he benefited from safety car phases, a flying restart of the race and the fact that Lewis Hamilton easily hit the track barrier on lap 32 and damaged the front wing of his car, which then had to be repaired. After the repair, Verstappen had then pulled out of the way. In the end, Max Verstappen took his eleventh race win in the Formula 1 World Championship with a lead of over 20 seconds over Lewis Hamilton.

The model of the RB16B of Max Verstappen was produced in scale 1:18 from the high quality resin by Spark. Spark has transferred the noticeable Red Bull painting as best as possible to the model. For collectors, this high quality model is part of the domestic collection as a reminder of the Verstappen victory in Italy. 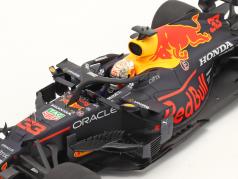 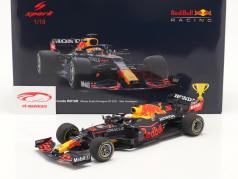