04.10.2021KÜS Team Bernhard: Weekend at the Sachsenring as part of the ADAC GT Masters

The weekend at the Sachsenring of the ADAC GT Masters was pretty successful for the KÜS Team Bernhard. In the points and on the podium 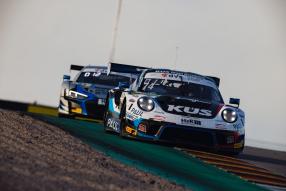 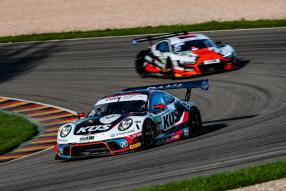 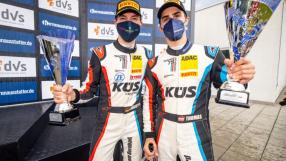 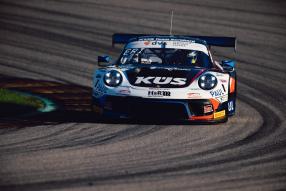 Position five for starting number 75 with the officiating champion Christian Engelhart (34, Starnberg) and Porsche works driver Thomas Preining (23, Austria), position eleven for starting number 74 with Joel Eriksson (23, Sweden) and Dylan Pereira (24, Luxembourg) - the KÜS Team Bernhard from Landstuhl could achieve proper championship points with its two Porsche 911 GT3 R in the Saturday race of the ADAC GT Masters at the Sachsenring. After strong performances in the free practice sessions, in which positions four and one were recorded for the #75, Christian drove in the extremely tight qualifying again - 18 cars were within one second - in the morning in ninth place, in the #74 Dylan landed at position twelve.

After a chaotic start with an immediately subsequent safety car phase, Christian fought his way forward. When the series of mandatory pit stops began, he was in seventh place. Thomas took over after an optimal handling, came back into the race in fifth and brought the position safely to the finish line after tough duels.
In the sister car, Dylan was also able to make up a place in his stint despite a heavy bump that caused some damage. Joel replaced him and was also able to cross the finish line in eleventh place in the points.

# 74
Dylan Pereira: “The start was okay. Unfortunately, I had a heavy contact on turn 1, which caused some damage, but I was able to continue and gain positions. Unfortunately, after that I couldn't keep up with the pace, because I had too much understeer. Maybe it came from the contact at the beginning. But we have learned a lot again, tomorrow we will come back stronger."

The KÜS Team Bernhard could celebrate the long awaited podium in the Sunday race of the ADAC GT Masters at the Sachsenring: Christian Engelhart and Thomas Preining fought position three in the Porsche 911 GT3 R with starting number 75. Joel Eriksson and Dylan Pereira with the sister car starting number 74, had to give up the race quite early.

The morning qualifying was interrupted at the worst time for the team from Landstuhl with the red flag. As a result, Thomas was in eleventh place on the grid, after all as the second-best Porsche, while Joel was in 18th place.

Thomas got off to a great start in the race and made up several positions. Joel, on the other hand, got involved in the mass collision on turn 1 and had to give up the race. At the restart, Thomas started the race from seventh place and worked his way forward regardless of another safety car phase. After a good stop and a driver change at the right time, Christian was fourth for the second half of the race and was able to put pressure on the people in front. In the last corner of the last lap, Christian used his chance and with third place achieved the first podium of the season in the German GT Championship for the KÜS Team Bernhard.

# 75
Thomas Preining: “The race couldn't have gone better. Qualifying was suboptimal, but in the end we really got the most out of it. The car was very good. At the start and the restart we performed really well and made up positions. We can be more than satisfied with third place, the team really needed this success. Thanks to the crew, hopefully we can build on that in Hockenheim."

Finally, let's hear team boss Timo Bernhard: “Of course it's fantastic to get the long-awaited podium in the last corner. It was a real explosion of joy in our box. Everyone shared the excitement and in the meantime also suffered. As a joke, I said earlier that our last podium in the ADAC GT Masters was mine in 2019 at the Nürburgring, and now the story finally had to be continued. Big thanks to everyone. Joel and Dylan drove a solid race with our #74 yesterday, but unfortunately they were out early today after the chaos in the first corner. Thomas and Christian were super strong in #75 with fifth place yesterday and the podium today. If you include the last race at the Lausitzring, we were fourth, fifth and third in the last three races. It can definitely go on like this. We belong there."

[03.10.2021] The last Porsche 911 in the body shape of the original type, which after 26 years marked a new chapter in Porsche's long success story