Last week, modelcars from Jadatoys in scale 1:24 were reminiscent of a famous cartoon character, who celebrated its birthday in the year 1930 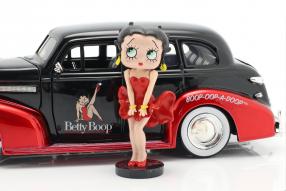 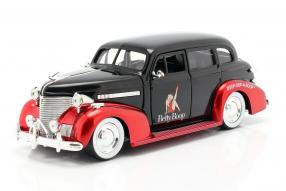 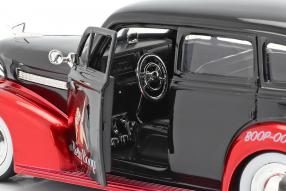 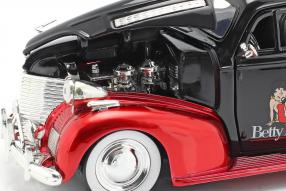 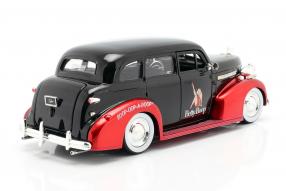 If we calculate correctly, then the owner of the red-black Chevrolet Master Deluxe from the model year 1939 is already around 90 yeras old. For this, Betty Boop did well, what the figure that Jada Toys delivers with the modelcars in scale 1:24, impressively convinces us. Last week, the diecast miniatures came on the market for the cartoon character that has been popular for decades and are aimed at lovers of models based on role models from cinema and television. They are available under item number 253255016. But who is Betty Boop now? Betty Boop is a character from the universe of the American cartoonist and cartoonist Max Fleischer. This makes Boop a sister of the cartoon character "Popeye the Sailor", also created by Fleischer; both successful products from Fleischer Studios.

Betty Boop celebrated her debut in the year 1930 as part of the talkartoons. This are 42 short cartoons with music and songs, which should make it easier for the audience to sing along. Two years later, the row was completely geared towards Betty Boop, whose optics, which were oriented towards dogs, gave way to the female appearance, which now also bears the figure that Jada Toys covers the Chevrolet Master Deluxe, which is equipped with opening doors and hoods. Even if its easily accessible drive set looks more like a toy, the lovingly made version of these miniatures is convincing: even the front doors and the trunk are designed as functional parts. At the time, the role models of the here presented model were proper new releases: it wasn't until 1939 that the Master received the large grill and the headlights on the side of the fenders.

Under the engine hood of the Master, 63 kW / 85 hp from 3.6 liter ensured propulsion. But Betty Boop should have been less intereseted about this fact: With short skirt, garter and a curly bob, she embodied the flapper-girl of the roaring twenties and was dressed typically sexy for this kind of woman type. She loved it as the very first female cartoon character to celebrate and dance with an own sexuality. According to the recordings in the film databases, the skirt should have slipped up or the garter down in almost every episode. The Hays Code, which regulated the morally acceptable representations of crime, sexuality and political content in the US film industry from 1934 to 1967, ushered in Betty Boop's change to a good housewife, which also meant her end. The series, stopped in 1939, however, still has a lot of fans today.