The probably most popular and coveted limousine in the upper middle class from 1989 is exclusively available at ck-modelcars.de: The Mercedes-Benz E-Class by iScale 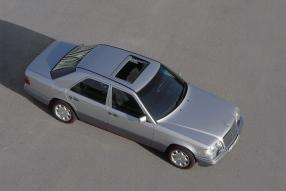 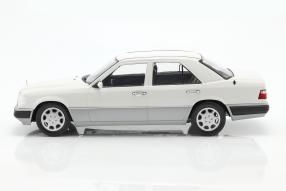 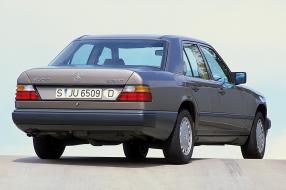 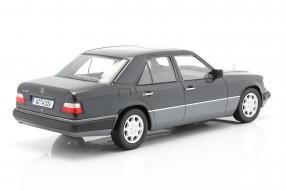 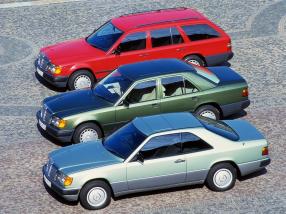 147 and 199 - Can you do something with it? Experts of the color code of the cars from Mercedes-Benz identify these numbers very quick as the paint number of the color arctic white and blue-black-metallic, in which ck-modelcars.de in cooperation with iScale presented modelcars of the Mercedes-Benz E-Class 1989 in scale 1:18. And that is the only mistake of the miniatures made from diecast, because only since the second major facelift in 1993, the manufacturer used the designation E-Class for the W 124 series; Along with the change in the nomenclature, the front only received the new radiator grille, which is framed by the bonnet and has the free-standing star on the bonnet, which represent the modelcars shown here. However, the W 124 has had the side protection planks on the sides since the model update called Mopf 1 in 1989.

Over and above that, the models are flawless: Neither in the appearance nor in the quality of the hand craf, in which they are produced, one can adress accusations towards the manufacturer. As a result of the cooperation mentioned at the beginning, the collector receives with the two W 124 excellently made miniatures of one of the most successful series from Stuttgart: The running "medium series" BR 124 at Mercedes-Benz included in the course of its production time besides the four door limousine also a coupe, a cabriolet and an estate wagon, the T-Model. In the limousine, the designers around Bruno Sacco, Joseph Gallitzendörfer and Peter Pfeiffer continued the design of the W 201 presented in 1982, better known as the 190 E or Baby-Benz. The characteristic rear has a favorable effect on air resistance: it dropped from cW 0.44 at the W 123 to 0.29.

If the engines are more powerful, only cW 0.32 was achieved due to the wider tires. And the medium series had a lot of drive sets: New Diesel engines should be highlighted here, because these play an important role for the taxi business: The OM 601 of the typ 200 D with 53 kW / 72 hp had the same performance data as the 190 D. Also new, the five-cylinder version OM 602 with 2.5 liter displacement in 250 D with 66 kW / 90 hp and the 230 E with 100 kW / 136 hp from the previous generation 123 belonged to the engine family M 102, from which also the engine of the 200 E with 90 kW / 122 hp comes. The eight-cylinder, we want to leave out at this point; because these were fitted with other fender amongst other things and thus do not correspond to our models here.

New, but in standard body: The six-cylinder injector M 103 with 2.6 and 3.0 liter in the 260 E with 118 kW / 160 hp and 300 E 132 kW / 179 hp. Many followers of this series call it as the last real Mercedes-Benz, because of the quality in the development and processing; similar with the W 201. Indeed, with a minimum of maintenance - especially on the jack jacks - these cars last almost forever and are now also increasing in the price of the classic car trade. Especially the convertibles and coupes, but also the sedans and station wagons are attracting increasing attention. A total of 2,058,777 units of the sedan, 340,503 units of the T-model, 141,498 units of the coupé and 33,968 vehicles of the four-seater convertible were built. 2,362 long versions and 6,426 chassis for special conversions are to be added.

The modelars from iScale are as mentioned above available under the item number 11800000052 in arctic white as well as under 11800000054 in blue-black-metallic. They are fitted with the replication of the eight hole rims of the S-Class W 140. The iron door handles are attached; the boot lid is smoothed in the area of the license plate according to the prototype. They are successful modelcars at a fair price, which are an excellent match for their colleagues: iScale namely has scaled down attracitve models to a collector's scale of 1:18 with the S-Class W 140 1994 in several colors, the G-Class W 463, the E-Class W 213 and the GLC coupe from 2018. All these are available inexpensively and offer no cause for criticism in the finish offer - see above. We recommend that you click on the link to the general overview embedded here. Have fun with it!

Here: Click to the modelcars of the W 124 or the Mercedes-Benz from iScale