Stay at home: Matt Damon, Christian Bale, Caitriona Balfe and Josh Lucas now bring the fight of Ford against Ferrari from the 1960s back to life at home 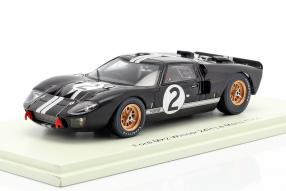 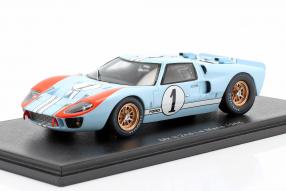 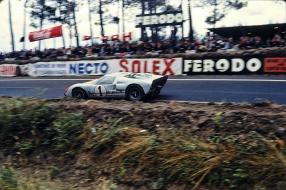 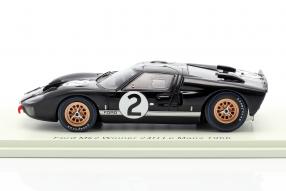 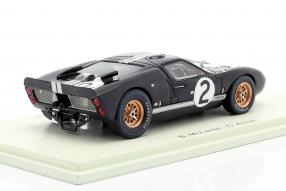 The corona crisis has also impact on the legendary 24 Hours race of Le Mans: This year, the event will take place on September 19th to 21st, instead of mid Junde. So autumn clouds instead of summer feeling. Pictures from the summer of 1966 and the previous year are shown in the movie "Le Mans 66 - Against Every Chance", which takes up the rivalry between Ford and Ferrari for the victory in the legendary endurance race in the 1960s and ultimately tells the story of how the Ford GT40 was created. The film, staged by director James Mangold, is now also available for home cinema: the action hit can be called up on the Google Playstore for a rental fee of EUR 4.99 and can be viewed on the Smart TV, tablet or smartphone or laptop. And we have the right modelcars from Spark and CMR for the right climate.

Spark has just delivered the models of the Ford GT40 Mk. II from Shelby American Inc. in scale 1:43, which were the racing cars of Bruce McLaren and Chris Amon, which was rated as the winner of the race from 1966. The miniatures appear under the item number 43LM66 in a special packaging with a sketch of the legendary race track. Of course, Spark also delivers the car with starting number 1: The car, whose role model of which looked like the sure winner up to the finish line after a race driven by racing driver Ken Miles, but did not become it - the dramatic climax of the race as well of the movie. The models in the livery of the sponsor Gulf have the item number S4975. As usual, Spark also delivers perfectly crafted modelcars here.

The focus of "Le Mans 66 - Against Every Chance" is the competition between the two car manufacturers Ferrari and Ford for the supremacy at the 24 Hours of Le Mans in 1965 and 1966. The trailer convinces with strong emotions, breathtaking driving scenes and an already recognizable fantastic equipment. Big cinema: Henry Ford II - played by actor Travy Letts - has taken over his grandfather's family business and wants to establish American cars in the market dominated by European manufacturers. After the idea of the young visionary Lee Iacocca (Jon Bernthal) and the failed sale of Ferrari to Ford, Iacocca brought the former Le Mans winner and engineer Carroll Shelby (Matt Damon) on board. With the Ford GT40, they wanted to beat Ferrari at Le Mans, something no American vehicle had ever done before.

With the British racing driver Ken Miles (Christian Bale), the work together on the revolutionary racing car, but the cooperation of the stubborn heads is more complicated than initially thought. But all have the same target: Ken Miles was supposed to be the first to cross the Le Mans finish line in 1966 with the Ford GT40; Politics and regulations decided differently: Ken Miles and Dennis Hulme took second place, while Bruce McLaren and Chris Amon took the overall win. Ronnie Bucknum and Dick Hutcherson finished third. The Shelby-American Inc. team thus took the first two places; the third GT40 was raced by Holman & Moody. The potential of the 7.0-liter V8 had been shown in the way Henry Ford II had wished it: a world that for us car fans is new in the feature film and can now be accessed inexpensively at home.