We want to present three new modelcars in scale 1:43 for the weekend: Porsche 911 Rauh-Welt Begriff and the transporter from Kremer Racing 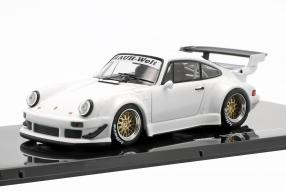 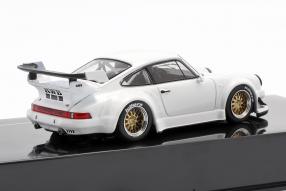 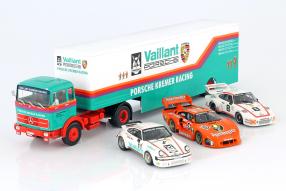 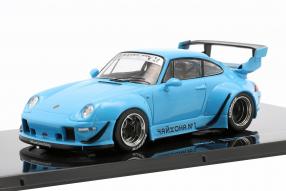 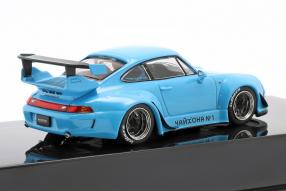 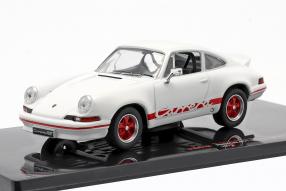 To start the new week, we want to present you miniatures from Ixo, which should appeal the fans of Porsche among the readers and know how to shine with a good price 7 performance ratio: The label from China, which has been known for the high-quality diecast modelcars for ten years, has presented two miniatures of the Porsche 911 in scale 1:43, which each have taken a variant of the nine eleven of the series 930 and 993 as a role model. But not in the design of the production from Zuffenhausen, but after visiting the workshop of the Japanese tuner Akira Nakai: whose label Rauh-Welt Term / RWB combines Japanese with European tuning elements and above all relies on extreme wide construction and lavish double Rear spoiler, such as the one named Royal Champion Wing.

Nakai sees his cars as "Second development" of its role models and also writes this partially on the body of the cars as one can see at the riviera blue models of the 993 on the rear spoiler. The attachments designed by his tuning company are personally attached to the base vehicles. The miniatures from Ixo depict the same passion as we know them from RWB in the original and are real hits at pocket money prices: They are therefore ideally suited as a souvenir or present for the Porsche enthusiastic youngsters. The miniatures of the Porsche 993 are available in blue under the item number MOC211; the white models of the 930 Turbo under MOC207. This also fits the car models of the Porsche 911 RS 2.7 from 1973, which Ixo offers under CLC321N in white with red stripes and the same color with blue stripes above the sill (CLC320N).

The modelcar manufacturer Ixo, however, is also increasingly devoted to the topic of racing transporters and thus follows numerous other providers. But what is the advantage for the collector of miniatures to touring cars from racing and for example civil Porsche? Clearly: A racing transporter on which the Porsche logo can be seen in bold is excellently suited for decorating a display case. It doesn't matter whether it's in a collection of racing cars or road vehicles. With the Mercedes-Benz LPS 1632 in front of its trailer, the Porsche Kremer Racing team transported its racing cars to the race tracks. The model, which measures over 36 centimeters in length, is based on the role model with the “cubic cabin” that was built between 1963 and 1974.

The models from Ixo of diecast replicate the long-distance traffic house. Such a transporter was last powered by the V8 or V10 with 188 kW / 256 hp or 235 kW / 320 hp. If you want to exhibit this model with the contemporary racing cars, Minichamps and Spark have the right cars in 1:43 with the Porsche 934 and 935. The racing team founded by the brothers Erwin and Manfred Kremer in Cologne in 1962 has relied almost exclusively on Porsche branded vehicles since 1964. Not only for the competitions that the team contested themselves, but also cars for customer sports have left the factory halls. The company also achieved some fame thanks to the Porsche 935 K1 to K4 adapted for the road. The true-to-original appearance of the racing transporter now enriches the collections under the item number TTR014.