Exclusively at ck-modelcars.de and each in an edition of just 600 units, five new modelcars to the Mercedes-Benz G63 AMG in 1:18 are available 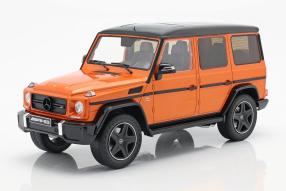 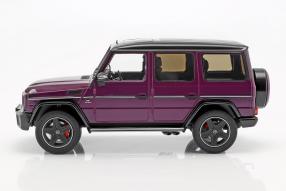 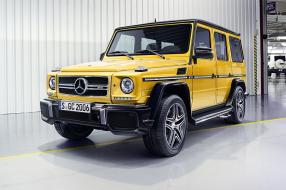 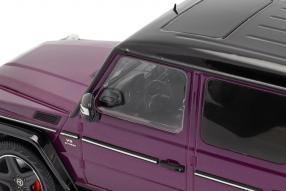 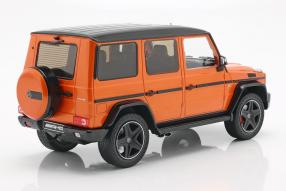 Modelcars to the Mercedes-Benz G-Class are nothing new in themselves; not even if they do appear in the colors, in which the car manufacturer from Stuttgart has presented its Mercedes-AMG G63 and G65 in 2015, the so called crazy colors. Because for this, models have been available shortly after the presentation of the role models by GT Spirit of resine, but the partners iScale and ck-modelcars.de have decided to reissue these spectacular-looking modelcars again, this time of diecast. The result are five high-quality car models that meet the lines of the popular prototype exactly and also implement the details such as radiator grille, roof edge, rub strips and the interior perfectly in the scale 1:18. The miniatures available exclusively at ck-modelcars.de invite you to take a closer look at them and their role models.

Ther Mercedes-AMG G63 thus comes in pop colors - with the roof and the attachment parts in obsidian black - to the collectors, which should provide a fresh breeze in the often dominated by black and silver car models showcases. Under the item number 118000000039 the models of the W 463 appear in solar beam yellow, in red tomatoes under the number 118000000038. Alien green is the issue with the 118000000037; the colors sunsetbeam orange (118000000036) and the impressively elegant galacticbeam purple (118000000035) are also available. The Mercedes-Benz G-Class celebrated its premiere in 1979, when the SUVs for the boulevards of the big cities were not invented. The company always added to the crisp workhorse a little model care, but the basic love even stayed there as the G-Class advanced to become a luxury crusier.

Since June 30th, 2012, the current revision to 2018 is on the market, which benefited especially by the interior: The new instrument panel and a new center console from the W 166 upgraded the car enormously. Externally, since the facelift, all W 463 models have LED daytime running lights below the headlights, a new front bumper and redesigned side mirrors. The top models are the G 65 with the V12 Biturbo, which draws 450 kW / 612 hp from 6.0 liters of displacement and also equipped with a twin turbo V8 in the G 63, which develops from its 5.5 liters 400 kW / 544 hp. A grille with two air intakes - depending on the model matt or chrome-plated - as well as bumpers with larger air intakes mark these vehicles; details that iScale and ck-modelcars.de have taken over according to the role model.

Here: Click to the crazy colors, the W 463 from iScale