Norev has achieved again a license from Stuttgart und brings the first miniatures to the newest luxury-SUV in scale 1:43 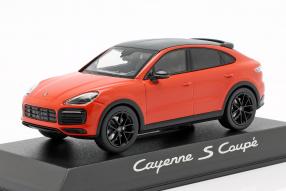 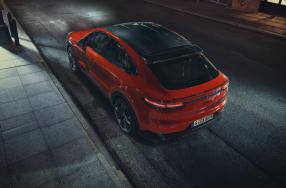 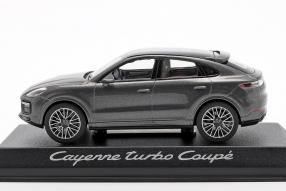 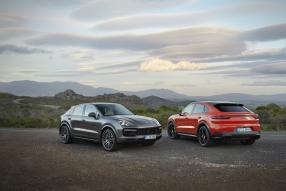 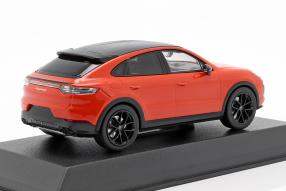 Two diecast-modelcars have reached us last week: The French from Norev have delivered modelcars in the colors quartzite grey and lava orange to the new Porsche Cayenne Coupé, the first version of the model series with sloping roofline. As always, the team from Vaulx-en-Vaulin near Lyon did first-class work and delivered the first models of the SUV, which was launched at a price of around 83,711.00 euros, in the typical Porsche packaging. The grey metallic painting of the role models costs 1,094,80 euro extra charge; the orange paint even 2,380.00 euros. Naturally, the colors of the modelcars are no longer compulsory and there is even a completely correct appearance for free: Norev reproduced the lines of the 1:43 scale modelcars exactly. Let's take a look at the role model.

The Cayenne Coupé comes from the third generation of the series and should appeal the sporty ambitious Porsche drivers. "The coupé includes all technical highlights of the current Cayenne, is positioning itself more progressive by an even more dynamic design and new technical details, athletic and emotional", says Oliver Blume, CEO of the Porsche AG. Among the highlights of the new Cayenne model include a sharpened shape with completely independent rear end, an adaptive rear spoiler, single seat characteristics in the rear and two different roof concepts - a standard panoramic fixed glass roof and an optional carbon roof. The proportions are actually more dynamic in comparison to the known hatchback basic version; it remains a heavy chunk anyway.

"The roofline, which slopes much faster to the rear gives the coupé-variant of the Cayenne an even more dynamic appearance and positions it as the sportiest model in the segment", says Michael Mauer, head of Style Porsche. This effect gets supported by a fixed roof spoiler, which emphasizes the coupé-like silhouette. The windscreen and the A-pillar are flatter than the Cayenne due to the lowered roof edge by 20 millimeters. The redesigned rear doors and fenders widen the shoulders of the vehicle by 18 millimeters and thus contribute to the overall muscular impression. The license plate is integrated in the bumper, which visually lowers the vehicle. Under which the trunk does not suffer: Its volume is 625 liters and grows with folded rear seats to 1,540 liters; in the turbo coupe from 600 to 1,510 liters.

Two high-performance engines are available for launch: The Cayenne Coupé with six-cylinder-turbo engine and 3,0 liter displacement has 250 kW / 340 hp and developes a maximum torque of 450 Nm. The standard sprint from zero to 100 kilometers per hour is done with the standard Sport Chrono package after 6.0 seconds. With the optional lightweight sports packages, the value is reduced to 5.9 seconds. The top speed is 243. The top model is the Cayenne Turbo Coupé with the 4.0 V8 with twin turbochargers, 404 kW / 550 hp and a maximum torque of 770 Nm. From a standstill, the Cayenne Turbo Coupé accelerates to 100 in 3.9 seconds. The top speed is reached at 286 kilometers per hour. A great car for which Norev has presented great modelcars.