Shortly before the successful title defense of Toyota Gazoo Racing, Spark delivered the modelcars to last year&#039;s winner 2018 in scale 1:18 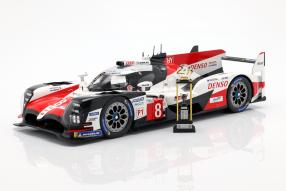 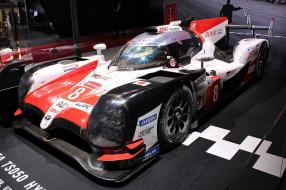 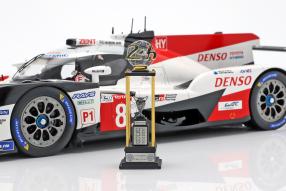 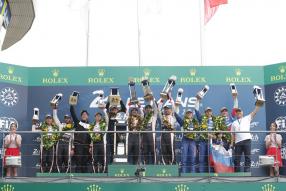 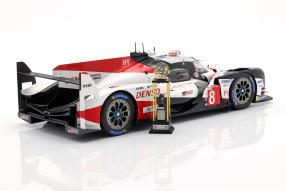 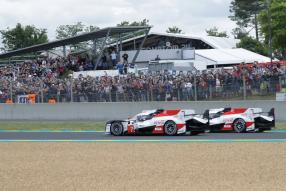 As in the prevous year, Toyota triumphed again in 2019 and won the 24 Hours of Le Mans: The 87th edition of the legendary endurance classic, which marked the end of the Super Season of the FIA World Endurance Championship WEC 2018/19, ended on Sunday with a double victory for Toyota Gazoo Racing. Again, the #8 car was the first car which finish first: after 385 laps, Sébastien Buemi, Kazuki Nakajima and Fernando Alonso came out on top in the Toyota TS050 Hybrid, repeating not only their previous Le Mans win but also defending the driver title in the World Cup overall standings. Spark has delivered to this same year's winner under the item number 18LM18 a superbly made modelcar in the format 1:18, to which the appropriate winner's trophy has been attached: As yesterday in the Ferrari quasi a preview of 2019.

So first back to last Sunday: Buemi, Nakajima and Alonso left their teammates Mike Conway, Kamui Kobayashi and José María López in the hybrid car with the start number 7 after a dramatic final by 16.9 seconds behind. However, in the run-up to more than 250,000 spectators, it had looked like a safe victory for the Toyota TS050 Hybrid No. 7 - until the electronics announced a flat tire and José headed for towards pits. But the sensors had identified the wrong tire so José had to pit again after a slow lap with a still flat tire. Kazuki in the 8 took advantage of the hour, took the lead and did not return to the finish line. But for the inferior crew there was a consolation, with which they made her skills fit for the history books.

The team from the TS050 Hybrid with number 7, which had dominated the race from pole position over long distances after the successful qualifying, was able to celebrate the fastest Le Mans race lap of all time with 3 minutes and 17.297 seconds. And even more history has been written in Le Mans: Kazuki Nakajima crowned himself the first racecourse world champion from Japan, and ex-Formula 1 World Champion Fernando Alonso is now the second driver, who won four world titles in two different disciplines. The first half of the race was competitive and tight: After twelve hours, the two Toyota teams were not nine seconds apart. It was not until the night that Team No. 7 managed to drive out a lead because their colleagues had to deal with aerodynamic problems due to a body damage.

Shigeki Tomoyama, president of Gazoo Racing said, "I want to thank all the fans, the supporting companies and all the team members who have fought here together." To win at Le Mans, you do not just need a fast car - you also need one strong team. We wanted to continue to improve on last year's victory and we succeeded. I am very happy that we have been able to open a new page in the history of Le Mans. But of course, our pleasure is clouded by what happened to our no. 7 car after such a long lead in the last hour of the race. We feel we can continue to improve the car and the entire team, and we are looking forward to Le Mans 2020 and the premier class of the long distance, which will begin in fall of 2020."

Toyota Gazoo Racing had already declared before the weekend in Le Mans, the WEC and thus the long-distance race continues to want to remain connected. Team President Hisatake Murata said: "Congratulations to the new World Champions Sébastien, Kazuki and Fernando, also for their second win at Le Mans, this was the dramatic final of an incredible season for Toyota Gazoo Racing and we look forward to our titles to defend in the coming season." And by the time we've got the modelcars for this year's winner, we look forward to the slightly different edition of 2018, which won the 24 Hours of Le Mans after 388 laps or 5,288 kilometers. The modelcars perfectly match the appearance of the model and reproduce every detail in a way that is far from perfect: congratulations also to Spark!

24 Hours race at the Nürburgring: Come and visit us in the Ringboulevard, across from the Rheinland-Pfalz VIP-Lounge on the coming weekend