Looksmart has released six modelcars in 1:43 of the previous year, before the weekend of the 24 Hours at the Sarthe. One of them looks like a preview 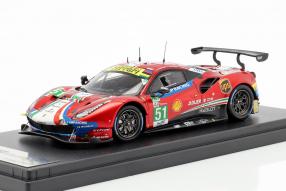 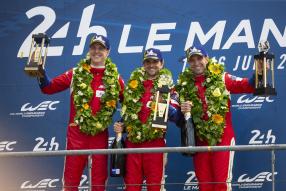 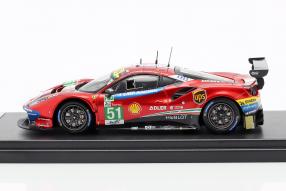 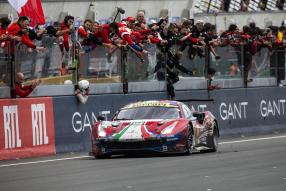 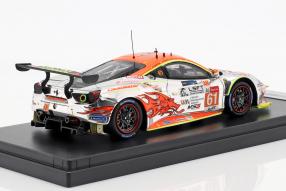 The 24 Hours of Le Mans 2019 are history: As in the previous year, Toyota Gazoo Racing won with the driver trio Sébastien Buemi, Kazuki Nakajima and the Formula 1 World Champion Fernando Alonso. Again the Toyota TS050 won with the start number 8, followed by the identical car with number 7; both waved off after 385 rounds. SMP Racing and Rebellion Racing brought their vehicles the LMP1 - in which also Toyota drives - in the places three to five; the ranks six to 19 belonged to the cars of the class LMP2. While we were expecting this overall winner, the winner in the GTE Pro category was a surprise for us: Ferrari won there with the 488 GTE Evo, used by Team AF Corse and with James Calado, Alessandro Pier Guidi and Daniel Serra: after 342 laps they could not take victory in the GTE pro anymore.

What really pleases us: AF Corse won exactly 70 years after the first Ferrari victory at Le Mans. Ferrari won the Le Mans 24 Hours for the 36th time, the 87th edition of the race. The win is the 27th in the class victory for the Prancing Horse, in addition to nine overall victories. The first was launched 70 years ago by Luigi Chinetti and Lord Selsdon in the Ferrari 166MM. The Ferrari 488 GTE Evo and its riders climbed the podium in the GTE Pro class for the first time. The AF Corse team had to wait for a triumph in the 2014 season: Toni Vilander, Giancarlo Fisichella and Gianmaria Bruni were the winners. Thanks to the 488 GTE of JMW Motorsport driven by Jeff Segal, Wei Lu and Rodrigo Baptista, Ferrari also reached a podium position in the GTE-Am class this year.

Let's take a look at the racing process for the winning car, which started with start number 51. With a lead of four hours, the number 51 Ferrari had even led the race for a few laps and was involved in a constant battle with three of the Porsche 911 RSR and the #63 Corvette. During the night, the very close fight between the Corvettes, Ferrari and Porsche raged on. The ability of the AF Corse team to make precise strategic decisions enabled the car #51 to refrain from refueling, something the competing Corvette failed to do. In the last three hours, the AF Corse team and the drivers of the 488 with the 51 provided a flawless race from a strategic point of view and finished with a lead of one minute ahead of the second placed Porsche. But now let's take a look at the modelcars that have been released.

Looksmart - ownspelling LookSmart - delivered six modelcars before the weekend, including one with start number 51. Also in 2018 AF Corse entered with a Ferrari 488 GTE and sat with James Calado, Alessandro Pier Guidi and Daniel Serra on the same drivers, who brought the victory in the Evo variant 2019. In this respect, the model of the previous year is almost something like the preview of the success of last Sunday. It is made out of high quality resin plastic available under the item LSLM082. The look matches perfectly the lines of the prototype, which ended up finishing seventh in the GTE Pro in 2018. Looksmart has released another five 488 GTE, to which the link under this article leads you.