The Golf GTI-rival appears in form of two miniatures from Norev and one from the house of Ottomobile: Diecast vs. resin-plastic 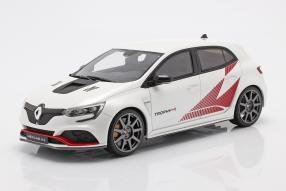 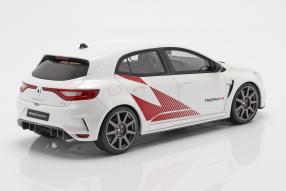 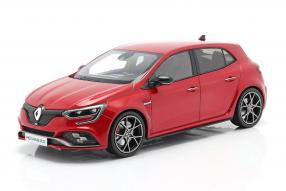 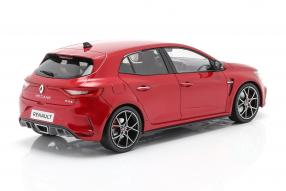 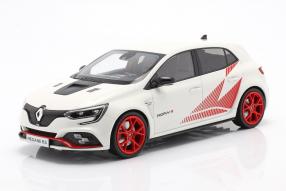 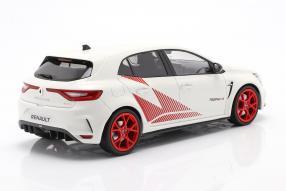 For the fans of compact sports sedans, the Renault Megane R.S. Trophy-R is a real blast: As the four-door model has been available to order since August 2019, a total of 500 units are going to be built and just 100 of them come to Germany. This makes the crisp French to a very popular vehicle, because it can still adorn itself with a very special success: The R.S. Trophy-R is the new lap record holder for front-wheel-drive series cars on the Nürburgring Nordschleife and the Circuit de Spa-Francorchamps. The sedan is based on the Megane R.S. Trophy, but is again 130 kilograms lighter and costs 59,740.10 euros in Germany. Two well-known modelcar manufacturers try their hand at this piece of sports equipment: Norev and Ottomobile (the two pictures above), so diecast competes against the high-quality resin. A comparison.

Let us start with the Renault Megane Trophy-R pack Carbon 2019, as Ottomobile calls the limited to 500 units white version of the sporty car. The modelcars come under the item number OT877 to the collector and replicate the line management of the Renault perfectly. In the area of the radiator grille, the competing models from Norev are on par with those from Otto, but Ottomobile can score with the design of the headlights. Ottomobile apparently drooped the additional headlights in the front apron; but there is an explanation for this later. As was to be expected, Ottomodels is ahead when it comes to rendering the brakes, calipers and discs; these parts are made simpler at Norev. Only Otto offers the discreet chrome stripes on the door handles; otherwise the collector can be satisfied with both versions of the control element.

At the design of the rear lights and diffusor, both models are on the same level; basically there are no magnificent differences to be recognized: Except in the material, because Ottomobile seems a little bit more high quality than Norev, which also bring the Renault Megane R.S. Trophy-R without opening doors and hoods. Thus, in our comparison, the Ottomobile is ahead, mainly because of the more detailed braking system. Norev reproduces the decor on the body of the white model with item number 185239 just as well as Otto models. Painted in red, Norev does without it (185223). Otto is also ahead in terms of price, because there is a difference of around 25.00 euros between the modelcars, but fans should be worth the more realistic brakes. Let's come back to the role models and what the Trophy-R offers in terms of extras.

The most important modifications compared to the original model is the bonnet made of carbon fiberglass with NACA air inlet for better engine cooling. Akrapovic supplies a sports exhaust made from titanium; the Öhlins racing suspension includes adjustable shock absorbers; Incidentally, supplemented by the Megane R.S. Trophy-R developed 19-inch low profile tires from Bridgestone. In the interior, fiberglass bucket seats from Sabelt with alcantara cover are used. The carbon-ceramic package chosen by Ottomobile as a model is even more exclusive: the small series of only 30 vehicles worldwide has 19-inch carbon wheels, 390-millimeter Brembo ceramic brake discs on the front axle with gold at a price of 85,740.10 euros Brake calipers and modified front air intakes in place of the auxiliary headlights.

Of course, the checkered flag is also used: The Renault Megane R.S. Trophy-R fromis powered by a 220 kW / 300 hp strong 1.8 liter turbo gasoline engine, which accelerates the sports sedan from zero to 100 kilometers per hour in 5.4 seconds and enables the four-door model to reach a top speed of 262 kilometers per hour. A six-speed manual transmission transfers this power to the front wheels. With a time of 7:40,100 minutes, the Megane R.S. Trophy-R set a new lap record for series vehicles with front-wheel drive on the Nürburgring-Nordschleife; in Spa it achieved this performance with 2:48.338 minutes. Regardless of which manufacturer the fans of the sports car will now choose: With every model they benefit from the Golden Autumn campaign, which offers a 10% discount on all miniatures.

Here: Click to the modelcars of the Megane Trophy R.S.