The Saturday at the Lausitzring gave the Porsche 911 GT3 R place 4; the Sunday an accident again. After No. 17, it also concerned No. 18 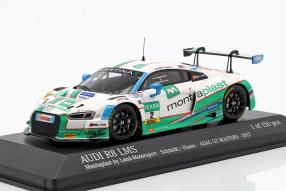 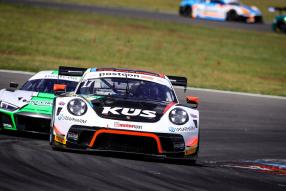 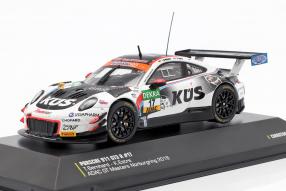 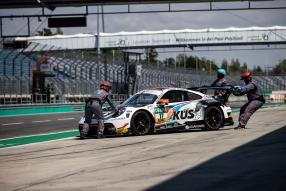 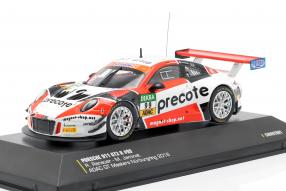 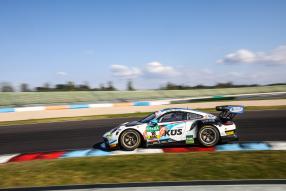 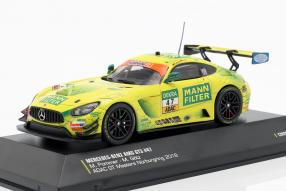 Racing driver Simona De Silvestro (32) from Switzerland and Klaus Bachler (29) from Austria normally represent the crew of the Porsche 911 GT3 R with starting number 17, but had an involuntary break last weekend: after a test accident on Monday in Oschersleben the nine-eleven was so badly damaged that the racing car could not be made operational again by the weekend. As if that wasn't annoying enough, the car that was ultimately left with the No. 18 had to give up the sails in the race on Sunday: David Jahn (29) from Leipzig parked the Porsche 911 GT3 R of the team from Landstuhl at the pits afterwards it was so badly damaged in the turmoil on the first lap that continuing the journey was out of the question. What remains? The joy of fourth place in No. 18 on the previous Saturday!

So Saturday! The KÜS Team75 Bernhard narrowly missed the podium in Saturday's ADAC GT Masters race at the Lausitzring: Jahn and Fittje (21, Langenheim) finished fourth. In qualifying, the youngster Jannes had a strong performance on a wet track in extremely difficult weather conditions and fought for fourth place on the grid - his best qualifying result of the season by far. In the race he was jostled hard right after the start and lost some ground. He then completed his stint flawlessly in demanding track conditions. When he made the mandatory pit stop, he was in sixth place. David took over and found a good rhythm, which was disturbed by two safety car phases. Ultimately, he crossed the finish line in fourth place after two competitors had received time penalties.

Great joy also at the young colleague: The placement also meant victory in the junior ranking for Jannes. A brief exhilaration that faded on Sunday: The KÜS Team75 Bernhard was already out of the race in the second round of the Sunday race of the penultimate weekend of the Corona-related compressed season: David had to park the car at the pits after the 911 was in the fray of the was so badly damaged on the first lap that continuing the journey was out of the question. Even the qualifying was unfortunate, as Jahn hadn't made a serious attempt to set the fastest time when it suddenly started to rain. On the wet track and in heavy traffic, he was only 16th on the grid despite the very good rainy seasons. The race itself was then over after a few meters.

This is because after a very good start - which brought him up to tenth place - David was pushed off the track and involved in a collision. Jahn: “My start was great, I was already doing really well in the first sector, then the scramble started in the second sector. In the long turn 9 I drove on the outside, everything was full inside and I didn't want to take off the accelerator. Unfortunately, one of them pushed three others out from inside. Then I was the one who suffered, slipped into the dirt. I might have been able to go on then, but someone hit me right in the next bend. I turned and then realized that something was wrong with the steering. It's just a shame how some people are out here. That was totally unnecessary."

Two rims were flat, as team boss Timo Bernhard explained after the race: “That was very disappointing because his pace was super good. It's a shame!" Let's finally get to the winners of the weekend: On Saturday, Audi drivers Max Hofer (21) from Austria and Christopher Haase (33) from Kulmbach for their Montaplast by Land Motorsport team were just 0.147 seconds ahead of the Mercedes-AMG duo Indy Dontje (27) from the Netherlands and Maximilian Götz (34) from Uffenheim for the Mann-Filter-Team HTP-Winward. The winners of the Sunday race delivered a strong performance as they started from 17th place on the grid Race: Mercedes-AMG drivers Mick Wishofer (21) from Austria and Dorian Boccolacci (22) from France managed a surprise coup for Zakspeed BKK Mobil Oil Racing.

The duo secured its first victory in the "League of the super sports cars" for its Mercedes-AMG GT3 Evo in wet conditions. Oh, and one more thing: KÜS Team75 Bernhard regular driver Klaus Bachler wasn't that free after all. On Saturday the Austrian drove in third place in the Porsche 911 GT3 R from Precote Herberth Motorsport with starting number 99; He seems to have felt so comfortable in the car that Bachler took second place on Sunday, alongside Robert Renauer. With the race weekend from November 6th to 8th, 2020, this year's chaos season will end with the two races at the Motorsport Arena Oschersleben! May the two Porsches of the KÜS Team75 Bernhard have recovered by then. Keyword recovery: stay healthy and keep the minimum distance! Unless, of course, you are a racing driver and sit in the cockpit!