Only from ck-modelcars is this color variation of the most successful S-Class of all time in 1:18 scale availible. We look at the model and the key points of the prototype 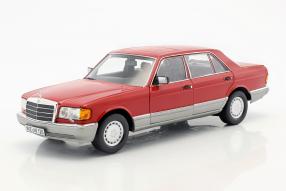 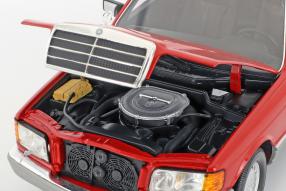 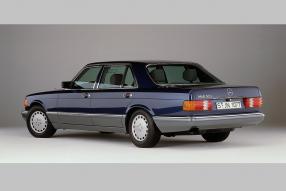 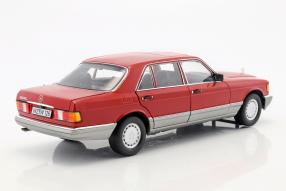 In 1979, Mercedes-Benz introduced a new luxury saloon, whose career in the sales program of the Stuttgart car manufacturer was a unique success story: The Mercedes-Benz S-Class W 126 series. The French model car label Norev delivers a model car of this, that is beautiful in every way, in the scale of 1:18, of which ck-modelcars now presents a unique color variant in signal red, limited to 1,000 units . The model with the article number 183463 corresponds to the second series of the W 126; externally identifiable by the smoothed plastic planks on the sides of the body and on the market since 1985. The miniature was made by Norev in the usual high quality Diecast and has four openable doors. Also, the hood and the trunk can be opened.

The proportions and appearance of the model car of the Mercedes-Benz 560 SEL W 126 series perfectly match those of the prototype. By opening the front hood, one looks at a multi-colored eight-cylinder engine with double fan, also referred to as a fighting horn Zweiklangfanfare and the silver-colored air filter housing. The headlights are transparent white, the side indicators are orange. The grille is two-tone chrome / black. The 560 SEL existed only in the so-called second series, ie the W 126, which was built from 1985 to 1991 and made with Kat from 1987 220 kW / 300 hp. This version, also known as a facelift, can be recognized, as already mentioned, on the planks and bumpers smoothed over the original version. The model measures about 28 centimeters in length, its prototype is 5.16 meters.

The replicas of the manhole cover rims has been carried out  by the tradition-rich company Norev perfectly in every way. Attached, two-tone door handles, the chrome-plated window frames, printed seals and a sunroof engraving stand for the great skills of the French model car makers. Which also applies to the detailed underbody, the three-dimensional tracing the chassis parts. Let's take a look inside: The dashboard, the steering wheel and the center console of the luxury liner from the 1980s are exactly matched by looks in the Norev model. The switches, the depth of the center console and the air vents optically match the controls of the prototype. The seat is passable reproduced; the wood inlays and decorative elements are completely present.

Look at the prototype story

In 1979, the Mercedes-Benz brand introduced the successor to the luxury sedan W 116 and christened the then latest S-Class with the model number W 126. At that time, no one from the circle of ladies and gentlemen from Stuttgart could imagine that this model would stay in the program for twelve years. The saloon alone brought it to 818,036 units produced. From the coupe 74,069 pieces were sold. The W 126 was manufactured so high quality, that according to the Federal Motor Transport Authority alone in Germany today still around 70,000 copies are approved. Their durability is legendary and delights the owners of the cult Benz whose driving characteristics its owners or those who once were, still rave about today.

Click here: for the model car of the Mercedes-Benz S-Class 1987