Herpa has provided a smart concept for a surprise, bringing out the Einsatzautos with the white-blue model cars before the competition 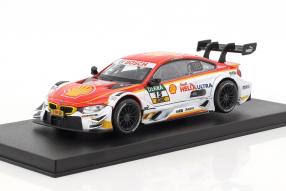 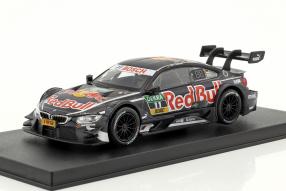 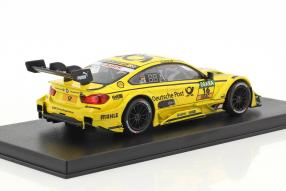 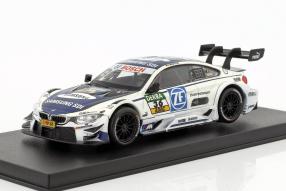 The most popular German touring car series, the German Touringcars Masters and DTM, will start their new season on the weekend of 4-6 May. This year fans can look forward to ten events and with Misano and Brands Hatch there are two new racetracks in the calendar to look forward to. While the traffic light for the prototypes of 2018 is almost green, it is a bit stuck for the model cars. We are still waiting for the miniatures for the last year season DTM from the brands Mercedes-AMG and BMW. But now there is a bright spot on the horizon. Herpa delivered the vehicles of Marco Wittmann, Timo Glock, Augusto Farfus, Bruno Spengler, Tom Blomqvist and Maxime Martin in the 1:43 scale of the 2017 DTM. Herpa? Herpa from Dietenhofen makes motorsports in the format of Minichamps and Spark? Obviously yes, and with a clever concept.

Herpa is a term to most collectors of model cars as a manufacturer of slavish correctly executed car and truck in the scale 1:87, which are found next to those of Wiking mostly on model railways. Again and again there have been efforts to get into the 1:43 format, in 1990 with the first of many very good Ferrari model cars. Meanwhile, the Dietenhofener with models for the Porsche 911 991 II or even the BMW M4 2015 have become home suppliers in the area of Minichamps and Schuco - with a quality that is not inferior to the mentioned top dogs in any way. The model cars for the DTM 2017 are a bit different: here, buyers were in the eye who wanted the big sport for a small price. The stars of the DTM as model cars in the pocket money format, robust and made of die cast, well detailed, a little plain, but really cheap.

Since the great success of RMZ with the Mercedes-AMG of the DTM 2016, we know that this concept works. They have been torn out of our hands by our shop and our sales team in the trailer at the race tracks. The quality is not bad at all: The appearance of the models matches very well with that of the role models; the lines are well hit. The attachments of the all-around-spoiler are well taken, but simplified in the production. They did without antennas. In the interior, all the important details are available: roll cage and fittings spray racing feeling. Rear wing and exterior mirrors correspond to the original parts; if somewhat simpler built, than with - still coming - miniatures of Spark and Minichamps.

But we are impressed by the design of the classic kidney on the front and the air ducts in the sill area: We see great model making! We are really happy about these models, which make it possible to also let the youngsters participate in the passionate sports of the DTM. The small price of the model cars must not obscure the fact that they have one thing in common with the collector models of Spark and Minichamps: The fire of love for motorsport burns in them just as with the more expensive models. With this in mind, we look forward to bringing you the cast-in-the-snow zinc model cars to the Lausitzring, where we will be on site with our trailer on the weekend of May 18th to 20th. By the way: Some models of RMZ we still have. Just click!