07.11.2017Porsche is long-distance world champion: victory in the WEC

Model cars of the racing cars from the LMP1 2017 are, except for a recording, waiting, but it is worthwhile to complete the collection 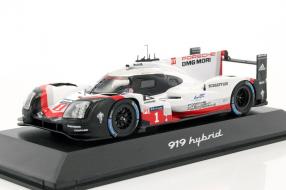 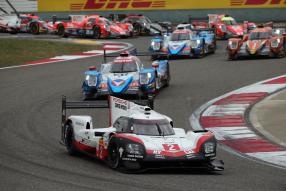 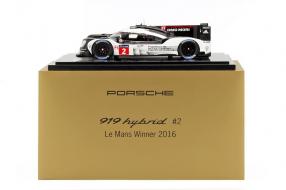 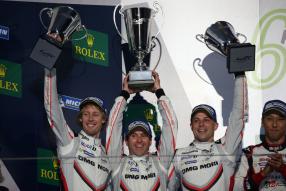 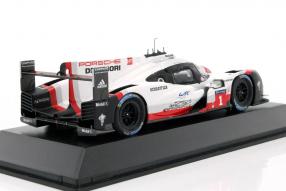 Porsche successfully defended the driver and manufacturer title at the penultimate round of the 2017 FIA World Endurance Championship in Shanghai. With places two and three, the Porsche LMP Team brought the two trophies to Zuffenhausen for the third time in a row. The factory rider trio Earl Bamber and Brendon Hartley from New Zealand and Timo Bernhard from Germany finished second in the six-hour race to win the title. The team-mates in the second Porsche 919 Hybrid - now relegated World Champion Neel Jani from Switzerland, André Lotterer from Germany and Nick Tandy from Great Britain - finished third in China. A defect at the start of the race had thrown back the three. Victory in the eighth of nine World Championship races went to Toyota. Until the 174th of 195 laps, it looked as if the Manufacturers' World Cup would remain open until the finals in less than two weeks.

Lewis Hamilton is prematurely world champion in Formula 1, the DTM won René Rast, so slowly the motorsport season comes to an end. With the model cars, it is unfortunately slower than it is the fans and us dear, because only the McLaren Honda, the Williams and the Force India have now appeared as a model cars; from the DTM 2017 is still nothing to see and the body updates to the LMP1 cars of the WEC are also not yet miniaturized. Somewhere seems to be a traffic jam, because we have been waiting for the Mercedes-AMG GT R for a year. Minichamps announced at the show in February to model the Supercar currently being tested by Vlogger shmee150. From the year 2017 of the WEC and Porsche, we currently have the presentation car for Le Mans 2017 by Spark in 1:43 under the item number WAP0209190J offer.

This is a Porsche advertising model in the outer packaging of the car manufacturer. In attractive packaging also numerous miniatures of the previous year's insert cars have appeared; both in 1:43 scale as well as in 1:18. Noteworthy is the model of the winner of the 24 Hours of Le Mans 2016, which we have with signatures of the drivers on the pedestal and has now been reduced in price to 249.95 euros. Just go through the embedded link below to the overview. Let's look again at yesterday, at Shanghai: The track was consistently dry with outside temperatures around 15 degrees Celsius. Once again, the wear-intensive asphalt played a key role in the Chinese Formula 1 circuit. Above all, Porsche made points that the second Toyota had to make a longer pit stop after a collision.

As a result, both Porsche 919 Hybrid moved up by one position, which meant safe points. Let's listen to André Lotterer on the race: "Cool, that we made the podium with both Porsche and congratulations to the three drivers for the drivers 'title, it's great that we also won the Manufacturers' Championship, the team did a great job for us It was a bit more difficult after the problem at the beginning, after which we just drove home the race. " Team Principal Fritz Enzinger, Head LMP1: "With today's race, an incredible story is slowly coming to an end, with six World Cup titles and three Le Mans achievements - what this team has done deserves the highest praise - Porsche is pulling out this season from the class LMP1 back in the WEC.

The 36-year-old Timo Bernhard winning the title: "The second World Cup title is amazing, I can not put it into words - it's an honor to drive for the Porsche LMP team and the brand, just mega. I'm relieved Now that we can travel safely to Bahrain, my stint was good, but of course he was under the premise that we're in third place, I could have won, but we did not have to. We even took a little bit of speed to get the car safely over distance, but the last bit was missing to annoy Toyota, but the car did hold and the crew did a sensational job again - that's what long-distance racing is all about Many, many thanks to everyone and of course to Brendon and Earl. "