The BMW i8 is a sports car that inspires many professionals with its looks and technology. Paragon Models presented the prototypical model. 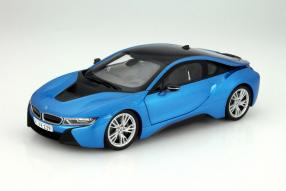 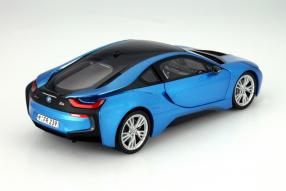 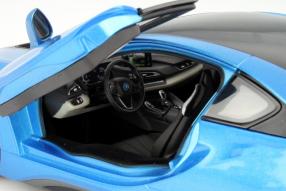 The BMW i8 is a sports car that inspires many professionals with its looks and technology. Paragon Models presented a prototypical model.
BMW i8 in 1:18 scale text picture 2 picture 3

BMW's preferred supplier Paragon Models has brought a technically perfect model car, the BMW i8,  out. The miniature comes in 1:18 scale with opening butterfly doors in the color Protonic Blue under item no 80432336840.  The very clean, carefully crafted model car is reflected in the compliance of its proportions to those of the prototype as an absolutely perfect representative of his species. However, the technology of the BMW i8 remains largely hidden because of the non opening hood. But Paragon and BMW at least equipped their hybrid sports car of the so-called Bburago, scale 1:18 with steerable front wheels and an authentic interior equipment in Carpo Ivory white. The price of the here presented model of the  i8  is only 79,95 Euro; the prototype is much more expensive and therefore a niche product, the value of BMW consists primarily, to score points with his technique as an image carrier. A task that the model meets.


The technology of the BMW i8


The model-specific plug-in hybrid system, developed and produced by the BMW Group, consists of a compact 1.5-liter three-cylinder gasoline engine with TwinPower Turbo technology, an electric motor and a rechargeable Lithium Ion battery. The electric motor with 96 kW / 131 hp nominal power and 250 Newton-meters (Nm) directs its power to the front axle. The internal combustion engine with a maximum torque of 320 Nm develops 170 kW / 231 hp and drives the rear wheels. The total output is 266 kW so / 362 hp, which accelerates the vehicle in 4.4 seconds from 0 to 100 kilometers per hour. Values ??that put the car in the category of super sports cars. The top speed of 250 kilometers per hour is limited electronically. The energy is stored in 98 lithium polymer battery cells. The battery has a usable capacity of 5.2 kilowatt hours. These enable a range of 37 kilometers in pure electric mode. The capacity of the fuel tank on the other hand is only 30 liters. The i8 is the world's first modelcar that comes with the optional laser light. The laser diodes are one-tenth the size of conventional LEDs, but emit ten times as bright and twice as far.

The BMW i8 and the peculiarities of the body


The BMW i8  with the series number i12 BMW has an air resistance of 0.26. The use of lightweight  carbon fiber reinforced plastic (CFRP) performs at  the same resistance to a weight saving of 50 percent compared with conventional steel or approximately 30 percent compared to aluminum. As advanced as  the material of the i8 is, it still is as traditional as ever : From traditional diecast. It may  be that the BMW i8 will not be the bestseller in 1:18 scale, which was once the Ferrari F40 from Bburago, but still the very fine interiors and a prototypical traced design of the dashboard and door panels are very convincing. The multimedia display protrudes from the instrument panel, the switches are prototypically colored, so the instruments look as if the electric motor had just been ignited. A successful From our perspective a very succselsful model car that should not be missing in any showcase. In its own way it represents the fresh start into a new era, the automobile industry now makes with the electric and hybrid cars.