Once the Mercedes-Benz 300 SL were what today are the F1 W07: the cars of the heroes in motorsports. High-end miniatures now appear in Diecast. 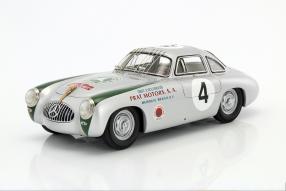 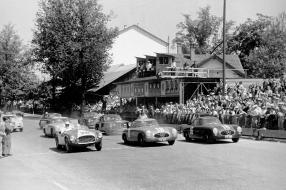 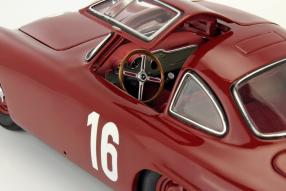 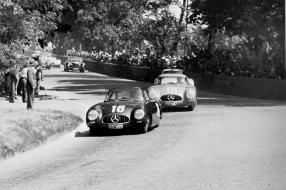 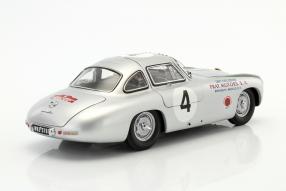 The legendary Mercedes-Benz race director Alfred Neubauer, who was also impressed by his stature, was still missing a victory at the Carrera Panamericana, the not-so-famous long-distance race through Mexico. In November 1952 the Stuttgart team was flying with four competing vehicles and 35 man escorts to South America. The engines of the racing cars, the Mercedes-Benz 300 SL of the W194 series, were drilled to 3.1 liters and thus came to 103 kW / 177 hp. In the minds of motorsport fans around the world, the race remains a special memory, because Karl Kling's car had a collision with a vulture 50 kilometers before the finish, where the front windshield broke. It was secured with metal bars - and Kling finished with number 4 as the winner. Hermann Lang took the second place with the number 3.

In a very specific way, these cars were brought back into the limelight just recently, as the design of the radiator grille of the vehicles is making a comeback under the name Panamericana Grill in the high-end Mercedes-AMG vehicles and the current Mercedes-Benz SL. The Autobauer, however, does not remind himself of the glorious times of Alfred Neubauer, but reveals the previously untidy appearance of his top models. To the top models, that is to say the best miniatures worldwide, Modellautos of CMC for many years. Karl Kling, Hermann Lang and Rudolf Caracciola took the prestigious company as a model for new miniatures, which were handed over to the specialist dealers and thus to us.

Finish and quality of the CMC models

It is not necessary to deal with the models of CMC: The collectors can rely on the miniatures from Fellbach to create real small works, which are made using authentic materials in manual work, which will delight and delight the admirer In value most likely. Doors and hoods are, of course, intended for opening and allow an insight into a form of model making, which suggests, perhaps, rather, an original as an image. Of course, the reduced six - cylinder in - line engine, which was equipped with an overhead camshaft and whose fuel supply was supplied by an injection pump, is particularly striking. Switch was made by fully synchronized four-speed transmission; At that time not self-evident.

There is something else

In keeping with the prototype, CMC supplies the model with a baroque watch collection, a beautiful wooden steering wheel and karo-patterned seats. There is not much to see in terms of content for the time, but the quality of it surpasses everything else in model building. The company offers three versions: the model with the article number M-159 on the deployment car of Hermann Lang in horizontal blue, limited to 1,500 units, the model of which took the second place of the Carrera Panamericana. The sister car, which was modeled by Rudolf Caracciola at the Grand Prix of Berne in 1952 (M-160), is the result of this success. We have no limits to Karl Klings Sieger (M-023): almost unlimited possibilities for further models, because the W 194 entered 1952 with many other races. In this sense: you a beautiful, F1-free weekend.