Ck-modelcars and Minichamps have launched two strictly limited nine elevens in the 1:43 scale, which are only available here. 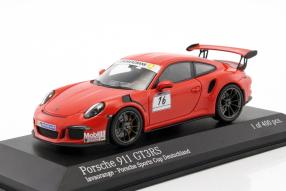 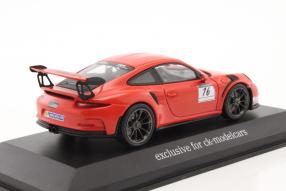 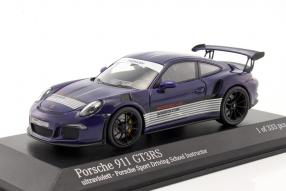 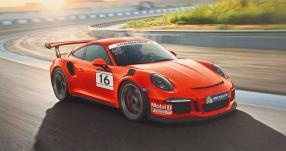 Loyal customers and readers of our blog have long known that the team of ck-modelcars, in cooperation with the manufacturers of high-quality model car, developed miniatures exclusively for our company. To the series of exclusively available models are now two Porsche 911 GT3 RS in 1:43 scale, which come from the producers of Minichamps. We do not have much to say about this very successful Nissan model, but it has often been featured in our blog: 368 kW / 500 bhp, the purist car has a unique appearance due to the fender's vents, even in the extensive family , Which now represents the 991 series. With the models that ck-modelcars now presents, the fans of the type GT3 RS can expand their collection by two representatives of the Porsche Sport Club Germany.

The Porsche Boxster, Cayman or 911 are located in the uniformity tests, the beginner's series or the race for vehicles with roadside tires. In the series for racing cars the Porsche Cup and GT3 R will be launched. For classic Porsche models, own rating classes are provided. The Porsche Sports Cup celebrated its 10th anniversary in 2014 and is one of the most successful customer and club sports events worldwide with up to 1,200 runners per season. And exactly on this cup orientate themselves the two Modellautos, on whose pedestal a reference to the makers can be found: of the 911 GT3 RS in lavaorange under the item number 413063253 strictly limited 400 pieces, from the counterpart of the instructor in ultraviolet (413063256) only 333 copies. We recommend: be fast, before they are gone!

Here in the video: Click on this link on vimeo.de and watch the idols of our Modellautos at about 1:25 min