In the last period of time there ha been a increace in miniatures of the HANS, a restraint for the head of a racing driver in motorsports. We explain all about it. 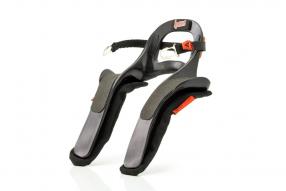 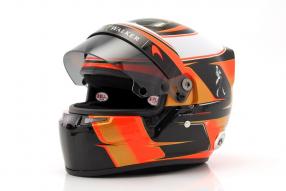 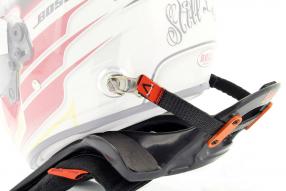 Matching the upcoming weekend and the Azerbaijan Grand Prix, the Chateau Briand label delivers another HANS model. This abbreviation is for the "head and neck support", a system that protects the head and neck of a racing driver. Freely translated: head and neck support, but rather a device that the head of the motor-coach can not fall too far forward in the event of an impact. Firstly, the risk of contact with the steering wheel is thereby prevented, and secondly, the neck is protected by overstretching against injuries. Chateaubriand precisely matches the corset of carbon-fiber-reinforced synthetic resin, which is seated on the shoulder; This in several variants, in the version Professionell from 2008, from 2008 to 2012 in the version Sport II and from 2015 as System III.

The models focus on the design of the protection device for Formula 1, but HANS has long been compulsory in the FIA ??GT World Championship, the IndyCar Series, the GP2 series, the Formula BMW as well as the DTM and other series. The systems are based on the invention of Robert Hubbard of Michigan State University, who developed HANS in the mid-1980s. At first much bigger than today's models, only sports car and prototype drivers benefited; In a cooperation with Mercedes-Benz, a fitting suitable for Formula 1 was constructed in 1997. The serious accident of Formula 1 driver Karl Wendlinger in the training for the Monaco Grand Prix 1994 can be considered a decisive factor.

Helmets and HANS also complement each other well in 1: 2

Wendlinger lost control of his Sauber C13 Mercedes on the fastest track section after the tunnel and thundered into the wall of the harbor chicane. His head bounced over the lower cockpit limiter at the time to the wall, which gave him heavy brain bounces. Initially, the wearing of HANS was voluntary, which changed in 2003. The HANS models form the system formally absolutely correct and have the effect, which can be staged in high-quality execution of the helmets of Schuberth and Bell magnificently and preordigerecht. Like this, HANS is held on a 1: 2 scale. The models to HANS however, which we lead, do not include helmets. As a very special addition we can recommend the helmet of McLaren Honda rider Stoffel Vandoorne, which is already available in the colors of the current season. What remains to say? Have fun at the Grand Prix of Azerbaijan.