Sunstar dedicates a high-quality miniature 1:18 to the standard model of the sports car, which was formerly known as a time machine. 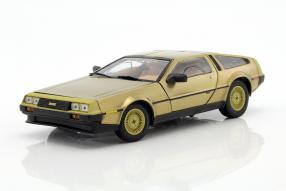 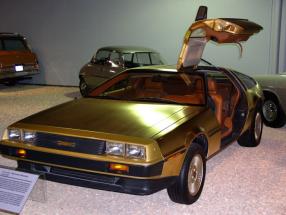 With the DeLorean SportCoupe, Sunstar Models has brought us a gold-colored lacquer, a hand-crafted model car made of zinc die-cast, which can be seen though opening doors and hood and a coherent look. The 1:18 scale model, which is in exceptional color, is reminiscent of the two DeLorean, which were commissioned by American Express on Christmas Day 1981, and were galvanically coated with 24 karat gold. On Christmas Eve 1982 - to the production stop of the sports car - the last vehicle was assembled from the remaining gilded parts. Then it was over with the running time of the wing movie trilogy "Back to the Future" as a time machine famous. Nevertheless, the DeLorean enjoys undiminished popularity among collectors of large and small cars.

The DeLorean Motor Company was founded in Michigan in 1975; In 1981, it presented its first and only vehicle with the DMC-12. A total of 8,583 copies of the Mittelmotorsportwagen were built to the end of the company. John DeLorean, a former vice president of General Motors, had the reputation to implement the sports car project with the help of the British government and its financial resources. However, DeLorean came at a time when the market broke out in the US and even drove Porsche and Ferrari sales. The DeLorean was not a better choice, as the 2.8-liter PRV engine of Peugeot, Renault and Volvo, which was only 97 kW / 132 hp, was not an attractive alternative to the race engines of the German and Italian competitors.

A diecast model with solid charm

The model car presented here with the article number 2702 does not have the production quality of the AutoArt model, which appeared last year, with the way of the hood closure but better reflects the production-technical standard, in which the model was delivered. The lines and details are of good diecast quality, all details up to the matt brown interior with pre-designed fittings and seats are well hit. We like the lining of the interior as well as the interior matt-black body, which can be seen on the front bonnet and the door. The model radiates a solid charm. This makes the roll over the desk while making phone calls fun. Sunstar will bring the DMC-12 more luck than John DeLorean, because after ultimately reproached allegations of illegal drug trafficking, he was at the end of the business after the end of the company.