7 model cars modeled after the racing car with the star from the German Touring Car Masters 2014 celebrate their debut in the showcases of collectors. 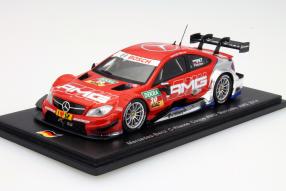 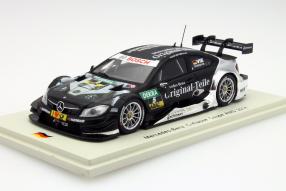 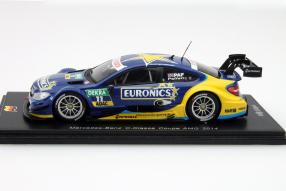 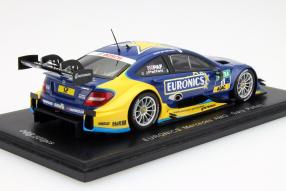 The 3rd place, more was not possible for the Mercedes-Benz in the DTM season 2014: None of the 3 votes was won by the Stuttgart-based label. Marco Wittmann won title of the Drivers 'Championship with his BMW , the BMW Team RMG won the team title and Audi made  first place in the Manufacturers' Championship. But that does not mean that the mold makers from the team led by Hugo Ripert of Spark have not built a sensationally good model cars of  the AMG coupé 2014 C-Class, they would also deserve  a apot  on the top of the podium  in finish, appearance and look.  We will take a closer  look at the  result of the work of Spark, that you - dear reader - can now put in your showcases : One model  better than the other,  high finish and each  available for 57,95 Euro .

As always, Spark has also developed new  DTM model cars of this year. The in 1:43 scale miniatures of Mercedes-Benz C-Class AMG coupe convince our critical  eyes with a lot of details. Let's start with the beautiful, very delicate simulated inserts for the grille and the lower air intake in the front apron. The model cars are of course made from resin plastic, which on one hand makes lower demands on  mold making and  makes small series like this economically viable. But the polyurethane casting resin also enables more delicate details  noticeable for example on the grill  in the front spoiler . Really great - also from the perspective of a mold maker - are the replicas of exceptional rearview mirror structures of the car.


These are not flanged to the door frame, but suspended from a t-shaped carbon carrier outside, ie not at the door. So, the air stream can flow there more evenly,  the air is  contrary to a lower resistance. Visually this rear-view mirror is without doubt one of the highlights, but does the reduction of the air resistance have effect on the overall performance of the car? Probably not, because the cars of Mercedes-Benz were not very far forward in 2014: Best rider was Christian Vietoris with the number 5 in the look of the original parts from Mercedes-Benz. He took victory in  the second race at Oschersleben and collected a total of 69 points, and ended up as the best Mercedes in the 8th place of the final classification. That the model car - available under item SG176 - is one of the most beautiful, should be noted on this occasion

The  limited edition model with  300 pieces built only, scores with the continuation of the tradition to equip the Mercedes-Benz DTM in the look of the original parts with a hood, that has the engine  painted on  and therefore gives the impression that the car does not have a hood . We like the car of Witaly Petrov, the Russian who started for Renault in Formula 1 in 2010 and 2011 just as much. He was dismissed before the end of the contract;-He wrote history as a the driver who brought 0 points in the DTM season. No points, but a nice car, the AMG in red (SG181). Crowd favorite Gary Paffett had  a bad year 2014: At the end of the season he was only 22nd place of the standings. He was the second-worst Mercedes driver, but the model is also top  (SG182).