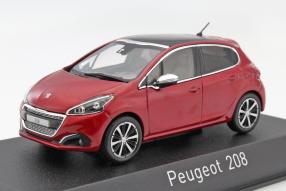 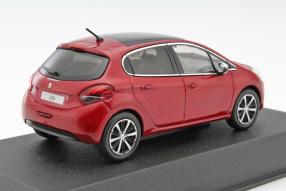 There are good model cars and there are very good model cars. Norev always builds good models, but with the Peugeot 208 in the 1:43 scale the French have surpassed themselves, since the finish fascinates especially in the area of ??the radiator grille by the attention to detail. The Peugeot 208 celebrated its debut in 2012 as a three-door and five-door driver, was slightly revised in 2015 by facelift. It was precisely this facelift that made Norev the model of the current modellautos presented here. Headlamp graphics and design of the front apron are in line with the equipment version Allure, which also fits the Rubi Red Metallic, in which the model was now presented under the item number 472819. Let us take a closer look at the seductive details of the little Frenchman and hear the latest news from Peugeot at the end of the year.

The consumption of the record drive writes history

The Peugeot 208 is only available as a front-wheel drive, is switched by five-speed manual transmission or a five-speed automatic transmission. Its engines deliver as diesel from 50 kW / 68 hp to 88 kW / 120 hp. The petrolers bring from 50 kW / 68 hp to 153 kW / 208 hp. The higher engine power of both fuel types is combined with a six-speed manual transmission. In the weaker versions front disc brakes and rear drum brakes come in front, while disc brakes are installed all around for the more powerful versions. According to the manufacturer, the Peugeot 208 had a low consumption record in spring 2015. With only 43 liters of diesel fuel, the 208 completed a distance of 2,152 kilometers in 38 hours, which corresponds to a consumption of less than 2 liters per 100 kilometers.

As mentioned at the beginning, the model car of the 208 from Norev inspires us with the design of front and radiator grille. The barbecue is a real highlight in the model business with its double color. The filigree structure of its slats is noble; The second color reminiscent of the so-called Diamantgrill from Mercedes-Benz. The imitations of the light alloy rims are styled in Carbone design and painted in Onyx black; Or depending on the model in Storm Gray. For those who want to buy a small collection of the Peugeot 208, further versions of this miniature are available: Orange Power Metallic under item number 47281, Shark Grau Metallic (472814) and Schneeweiß with the name 472813. The shaping of the wheels Is on all models the bangers and the level of the model of a super sports car.

The quality of the model car is great

The Modellautos of the 208 have got a large glass roof, which fits perfectly into the body made of zinc die-casting. Also the fitting of the glazing of the interior leaves nothing to be desired. The quality of the paintwork, the quality of the chrome plating around the windows as well as the design of the exterior mirror housings are free of defects. The moldmakers have also done a thorough job in the interior and the appearance of the faucet panel system, seats and side panels have been precisely implemented. The control elements were dyed in the right way, the instrumentation exactly reproduced. Keywords Operation: To the navigation system of the model, Peugeot on 4 January 2017 has announced a news.

What's new in the navigation system

Both the 208 and the City SUV Peugeot 2008 benefit from the new model year from a new navigation system, which is available from 850,00 Euro. The navigation system based on TomTom maps convinces with its 3D representation and topicality: in real-time, travelers are informed about traffic disturbances on their route. The system has MirrorLink and Car Play so that the contents of a corresponding smartphone can be displayed on the large touchscreen of the 208 and 2008. Navigation, telephone and mediasystem can be activated via voice control; The navigation system now benefits from a free lifetime update offer that can be used up to four times a year.