With a model car of the Volkswagen VW Joker in the 1:18 scale, the forther manufacturer wakes up a very big rice drink in a small space. 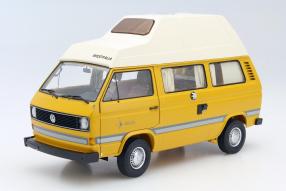 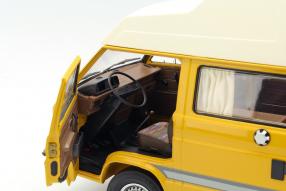 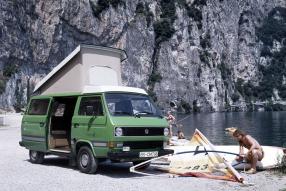 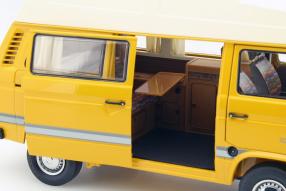 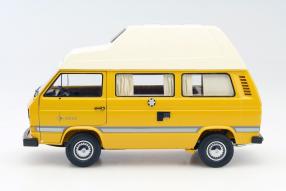 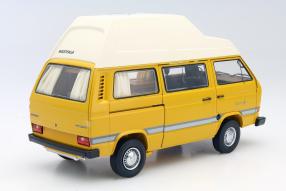 The new model car for the VW Joker mobile car from Schuco, based on the VW Bus T3 with high roof, in the Edition 1, is the perfect model for high-quality workmanship in varnishing and imprinting, rich in interior trim and like the model : 18 on the market. In addition to the exact interior design of the living space at the time, which was produced at the time from Westfalia's production, the model car made of zinc die-castings with all-opening doors, the movable tailgate and the functioning engine cover. Under the item number 450038500, the fans of the popular Volkswagen Wohnmobiles from the 1980s at a fair price can put a fantastic picture of their dream car into the showcase.

Memories of the miller

The author of this article recalls the Müller family. Originally working in the repair shop of a Volkswagen dealer, he looked after the pensioner's couple if he had a problem with his VW Joker. The miller's treated the car like a child, cared for it, but did not care, but went on a great journey with every opportunity. Unlike its car, the Joker from Schuco does not have a folding roof, but a fixed high roof in which the sleeping cabin is housed. But before we start up, we should go around the Modellauto once: As mentioned at the beginning we do not find any blemish, but many, many lovingly made details. Just like the power connection device or the trigger on the outside in the direction of travel and the carefully reproduced - retracted - telescopic antenna.

The holders for the opening windows in the front doors and the handlebar handles, the rubber strips on the bumpers and the front air grille are fantastic. Inside the small T3 fascinates the kitchen equipment and the upholstery above the engine. Its cover is open and gives the view of a fantastic drive set free. The T3 was the last new development of the group with air-cooled rear-engine, but in 1982 VW already changed the versions with Ottomotor to water cooling. It was only in 1990 that the T4 introduced the completely redesigned bus with front engine and drive. In 1992 the production of T2 was completed in Europe, but it was built in South Africa until 2003.

The engines in the VW T3

The T3 was developed under the designation development task EA 162, which was sufficiently motorized with the engine power of 37 kW / 50 hp or 51 kW / 70 hp. The new, comfortable and safer chassis offered a rear-axle rear axle, double-wishbone front axle and coil springs all around. Two years after the premiere, a water-cooled diesel engine with four cylinders in the rear row worked for the first time; Only one year later, 1982 water-cooled box-type engines started, whose power output from 1984 to 82 kW / 112 hp. Our model car from Schuco still does not form a water-cooled T3 because the front grill is missing. For this purpose, the doors and the sliding door can be opened wide; To reduce a sliding door and to operate it requires a high mold construction effort: Thank you, Schuco.

The small curtains on the windows and the wheel trims with chrome-plated finish, the colorful seat covers and the steering column, which is completely unusual today, and a straight-legged steering column provide a good impression of what a T3 from 1979 looked like. This is also the case with the civilian version, which is the version of Bus, which is also used by Schuco in the program, and which brings the same positive features as the housing system and the high roof. The fact that the air supply grilles in the rear column are not only engraved, but go deeply into the depths, speaks for Schuco's details. However, you can see the whole model, which we would recommend as an absolute eyecatcher for the showcase. With the strong yellow it makes the sun shine there. The miller's would have bought one.

Click here: The link will take you to the mentioned "civilian" VW Bus T3 from Schuco in 1:18