For the 25th anniversary the modelcar label presents 2 high class miniatures in 1:18 scale,from the last series 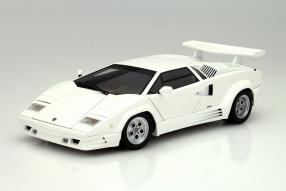 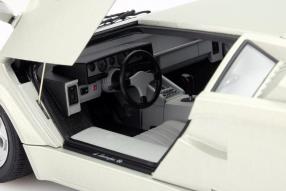 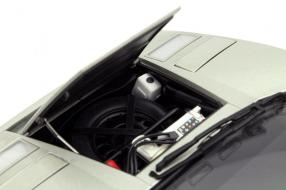 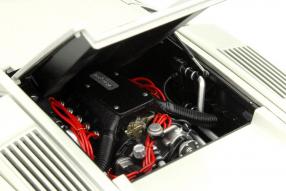 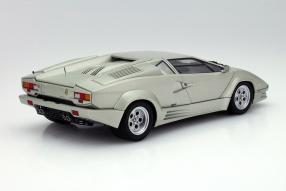 After the Lamborghini Asterion of  tomorrow let's take a look back to yesterday: For  many years the label AutoArt  is one of the best manufacturers of model cars, which is known by the collector world. With the two new publications of the legendary Lamborghini Countach models  AutoArt has once again demonstrated how models in scale 1:18 scale can look  today. Of course - 224.95 euros for a car model are not exactly cheap , but  AutoArt puts a  detailled die-cast zinc model, almost artlike in your showcase. Definitely  the two model cars are in the upper price reange, but the detailing  they do is also up in the higher levels: Just look under the hood and discover a reduced twelve-cylinder with contrasting details and a realistic cabling - just one example of the extraordinary finish


The Lamborghini Countach and its story


The sports car comes from a time when Lamborghini was still  Lamborghini  and did not belong to Audi.  The Italians presented a study in 1971 that  received so much attention  that the Countach version debuted in 1973 at the Geneva Motor Show and Accessories . In 1974 the first car was delivered: The LP400 with 12 cylinders and a 4.0 liter engine brought up to 276 kW / 375 hp. The design of the car  build on a spaceframe  is by Marcello Gandini fromBertone. The Lamborghini Countach was built in this version until 1978. From 1978 the LP400S which received  front and  rear spoiler and fender flares was standard. The LP500S made made up for the environmental-related power losses , and came back   as Lamborghini Countach QV LP500S for Quattro Valvole with 335 kW / 455 hp in 1985.

The last series serves as a model for the  model


In between 1988 and 1990, the last version of the revolutionary designed sports car launched the end of the series with its characteristic scissor doors : The Lamborghini Countach 25 Anniversary was also a jubilee model for the 25th anniversary of the company established in 1963, Automobili Lamborghini. The motor remained as it was, but the body was refreshed. It  got redesigned tail lights with intervening aperture, side skirts with air inlets and a revised front bumper with side air intakes. And these details  AutoArt characterized with  extremely successful models for representing 2 versions of the anniversary edition: The production version under item number 74537 in white paint from the debut in 1988 and the silver version of the last built for the museum (74536) without spoiler


AutoArt offers the high end  miniatures opening doors and hoods, which are blackened prototypically on their bottoms. The finish  is perfect from the perspective of a mold maker when it comes to comes to closing gaps. Needless to say that  the lines and the design in appearance are perfect. The look under the hood of the mid-engine, whichs  transmission is the prototype of power set leaves a   great impression : four times colored,  all assemblies in 3D, great looking  ignition cables. The good impression continues in  the interior : Razor-sharp scales in  perfectly made instrument panel, high-quality looking surfaces, felt on the ground.  Under the hood in front is the horn, spare wheel and various containers to be looked at. Our conclusion: Both models of the legendary sports car leave a stunning impressio, recalling a time when the German perfection has not yet moved to the italian carmakers.