Herpa has once again managed to get hold of the first license for the production of an advertising model Porsche. The new Panamera appears in 1:43 scale 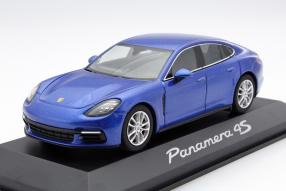 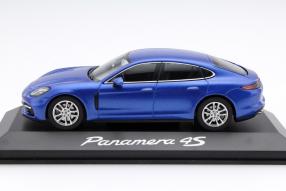 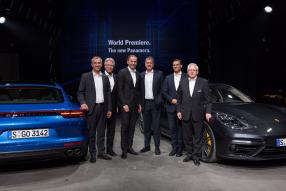 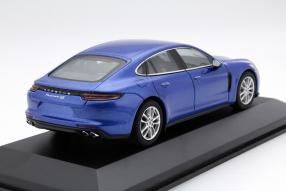 On June 28, 2016, Porsche introduced the new Panamera to the public in Berlin, the second edition of the four-door luxury liner, whose first edition was produced since 2009. The new car has is lighter and should be more plesently styled; it has become alittle desirable in the new edition, but the complacency does not diminish. The new, internally designated by the Series 971 four-door builds on the MSB platform of the VW Group. Herpa has beaten Minichamps with the receipt of the license for manufacturing the Porsche 911/991 II as preferred supplier in this field and is now even by the Panamera. Herpa build good model car in this size before: The Ferrari F40 and 348 in 1:43 of plastic are  not forgotten; as well as the Mercedes-Benz W 140 diecast zinc. For this Herpa now also manufactures the Panamera.

Good work Herpa has made the new luxury liner from Zuffenhausen and made the appearance of the body and their lines perfectly. Porsche can be really happy with our choice of supplier. The models appear in shades of midnight blue metallic under item no WAP0207230G in Agate Grey Metallic (WAP0207470G) and WAP0207210G the striking sapphire blue metallic for each 49.95 euros. worked out fine, the details in the front apron; the finishes are spotless, the glazing fits excellently into the Diecast environment. Doors and hoods remain - closed - as is usual in this format. A slight penalty for whining at a high level there are for something to rough inner workings of the not quite perfect-fitting headlamps. For the model scores with technical proper replica wheels.

View of the prototype

In Berlin, Porsche relegated proud of the success of its predecessor, which has been sold since its debut more than 150,000 times. The new Panamera can be ordered now and is available from 05 November 2016 from the merchants. Prices start in Germany including VAT at 113,027 euros for the Panamera 4S. The Panamera 4S Diesel costs from 116,954 euros and the Panamera Turbo from 153 011 euro. "With the new model you see here a completely newly developed car -.. With new engines, with a new design, with new technologies is also new that we now completely finished the second generation in Leipzig We have a total of 500 million euros invested - among other things, for an entirely new body, "said CEO Oliver Blume on Tuesday night in the German capital.

The design language of the new bridges to 911 by a more dynamic Flyline and specific design elements of the sports car icon. The new bi-turbo engines are equipped with a new eight-speed dual clutch transmission (PDK II) up to 16 percent more efficient, so Porsche. A 404 kW / 550 hp V8 petrol engine drives the Panamera Turbo, a V6 gasoline engine with 324 kW / 440 hp Panamera 4S. In the case of the Panamera 4S Diesel V8 with 310 kW / 422 hp for powerful thrust makes - and a maximum torque of 850 Newton meters (Nm). While we are pleased with the weighted with a 2 model, we are worried about the friends of Minichamps, because that Aachener lose a work order after another, which falls not only on when browsing through the new catalog.