31.05.2016Everyday life has begun for us again - Maserati Khamsin of Top Marques

Now back from the well renowned circuits in the world, we dedicate ourselves to the everyday and review a model car in 1:18 scale. 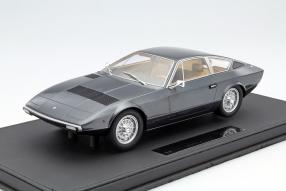 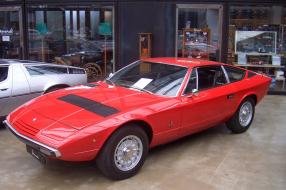 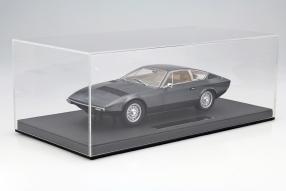 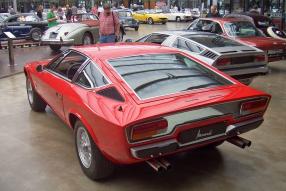 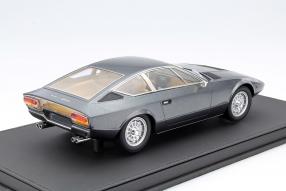 After a hard weekend, which has been filled with the 24 Hours of Nürburgring and the Formula 1 race in Monaco, we are back to the normal everyday again; we exchange circuit with desk and take notice of a freshly delivered Maserati Khamsin that Top Marques made in resine plastic 1:18 scale. A great choice for a prototype because, there are not really many model cars of this 1973-1982 built sports car. The of Top Marques is the required 219.95 euros and 179.95 euros not necessarily a bargain, but offers the collector the choice to buy it with or without cabinet. In both cases, the miniatures are of the highest quality.

It was not always about the fate of the brand Maserati ordered as good as today in conjunction with Ferrari. At the time, as the Khamsin was presented Maserati belonged to Citroën and had therefore not necessarily the power that was needed to compete against the major competitors Lamborghini and Ferrari. So designers had to parts of the Citroën-shelf borrow to build the Khamsin the successor to the Ghibli. Basically not a bad thing, but Maserati wanted then follow the mid-engine concept of the two aforementioned competitors and put on his two sports cars Bora and Merak. The Khamsin but should follow the classic concept of front-mid engine, so the front-engine behind the front axle - created as a V8.

And this engine took from its 4.9 liters of displacement 235 kW / 320 hp. was connected through a five-speed manual transmission or optional three-speed automatic. The top speed Maserati has given as 275 kilometers per hour. Due to the safety regulations in the US, built for the export version of the Khamsin differed significantly from the original variant, the Top Marques his model. In addition to the more bulky bumpers version had for America deeper set taillights outside the glass rear wall of the luggage compartment, which was reached by a large tailgate. Elegant was unquestionably the original model, the Top Marques in appearance and the look and perfect beamed down in the scale of 1:18.

Good note, of course, for the Khamsin

Doors and hoods remain - as in the polyurethane casting resin Resin common as the main material - of course locked, but through the generous glazing that provides the model, the collector receives a great insight into the model, often referred to as cheesy interiors. A formidable-looking instrument panel with many switches then seemed to have been Turismo, which should be the Khamsin as a symbol of the luxury of a grand.

Top Marques has devoted themselves to the intierior at the inner door panels with love, so also in the replica of the alloy wheels, the baffles and grilles. The finish of the seats - the prototype of leather - and the body and its attachments, such as mirrors, door handles and tailpipes earn grade A, which when compared to a diecast model is like a B+. One thing is certain in the end: With this model, the return from the circuits to the desk is really fun.