Aachen provides collectors an exemplary model of last year car from Bottas and Massa into the starting field. 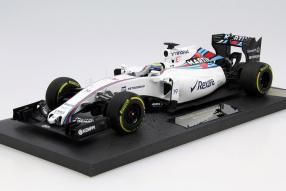 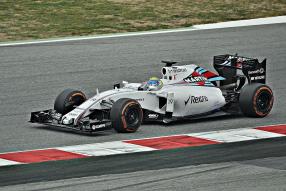 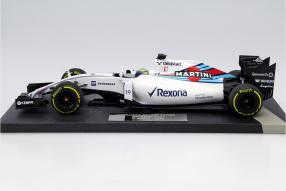 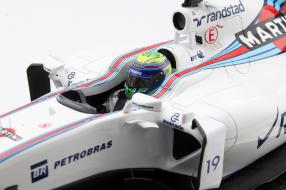 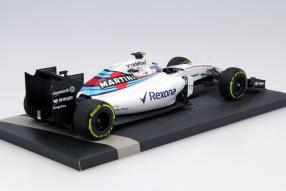 The company Williams Grand Prix Engineering Ltd. starts  in the Formula 1 under the name Williams Martini Racing Since its founding in 1977. Currently it is led by team boss Frank William's pit crew with the two drivers Valtteri Bottas and Felipe Massa on the start. At the Grand Prix of Russia in Sochi the fired engines from Mercedes-Benz racing car of the type FW38 demonstrated a very good 4th and 5th place with only 00: 31,998 or 00: 50,217 minutes behind winner Nico Rosberg, the after 53 laps was able to celebrate his fourth victory of the season and the 7th win season across. Unfortunately, there are not the models of the current race, but only to the cars of the previous year. With the previous model FW37 Williams finished the season ending 2015, the 3rd place in the Constructors' Championship. Minichamps presents, from this prototype a fantastic model car.

Made of cast resin plastic and mounted on a baseplate, which looks like a piece of asphalt, so is the FW37 presented to the collectors. To make it short: The model car is in terms of workmanship and finish the details world class. The Aachen have thus once again proved how good they are. The proportions, curves and lines subscribed by designer Pat Symonds prototype have transferred mouldmaker exactly in scale 1:18. The details of the suspension front and rear - Torsion bar- and shock absorber system with thrust strut or Torsion bar- and shock absorber system with tension strut - the engineers have implemented exemplary into the model. The details in the cockpit have been made with care, leaving nothing to be desired.

The telemetry antennas wind directing from the side boxes and the elaborately reconstructed spoiler know the friends of the current Formula 1 inspire. Regarding the sponsorship, model and model keeping discreetly and thus achieve much more effective in terms of donors: Martina and Rexona are placed sparingly, but come to the shell with their white color to best advantage. The FW37 drove in last year's season a 257 championship points; his drivers managed four podiums.

Then, as now started Valtteri Bottas and Felipe Massa for Williams Martini Racing and realized 20 laps over 117.82 kilometers. As for the current World Cup status, so prove Bottas and Massa to Sochi on the 9th and 6th place in the driver standings and the team with 51 points 4th place in the constructors' standings. Scramble with Red Bull for the 3rd place, which should be the season 2016 Williams, because the leaders Mercedes and Ferrari make a solitary peak, which is unassailable for Williams.

Fans! Next weekend starts the DTM 2016 in hockenheim: As of Friday, 06 May, you can find our ck-modelcars trailer between grandstands North A and North B, bringing the latest model DTM cars and many other promotions. We are looking forward to seeing you!