Minichamps has the winning car of the Formula 1 World Championship 2010 set a great monument in 1:18 scale, which is now available at a special price. 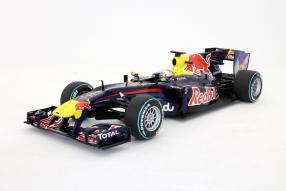 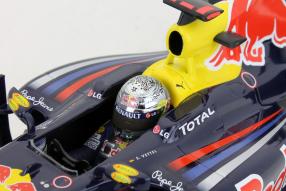 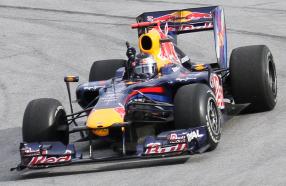 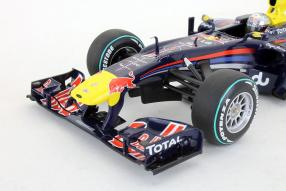 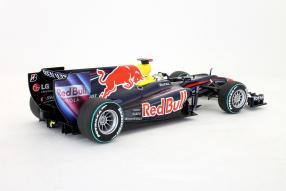 There are things that never change: It's not the first time that Formula 1 champion Sebastian Vettel fell far back and has nevertheless fought their way up to a leading position in the end. Just like in yesterday's race at the Shanghai International Circuit in China, in which Vettel with his teammate Kimi Raikkonen collided shortly after launch, slipped far backwards and ultimately still with only 37.776 seconds behind was able to celebrate with the winner Nico Rosberg on the podium. Although Vettel with Ferrari has a well-known and equipped with all the necessary resources team, still missing the connection to the times at which reminds us a model from Minichamps, we can now offer particularly favorable.

The year 2010 was for Red Bull as well as Sebastian Vettel a very big year because this constellation won first time the Formula 1 drivers 'championship and the constructors' world championship. Vettel won with 256 points just ahead of Fernando Alonso to Ferrari with 252 points. Bigger was the distance between Red Bull Racing and the works team of Mercedes-Benz, which deals with 454 points against the 498 of Red Bull after all, been able to secure the 2nd place in its premiere. Minichamps has the youngest champion in Formula 1 history set a finishing of the house appropriate, high-class monument to the model of car RB6 1:18. There is a special version with the suffix "last Race Abu Dhabi".

Once for 89.95 Euro at the stores ck-model cars it now for 39.95 Euro; a chance to remember the great year of the sympathetic Heppe heimer as they will hardly again. The model car from a Renault V8 with 2.4 liters driven race car corresponds in appearance and the numerous details exactly subscribed by Adrian Newey model. Minichamps put a lot of emphasis on a correct reproduction of the front and rear axle constructions, built the various large and small chips in shape and size to perfectly, creating an exact copy of the front spoiler. The hood remains closed, but convinced the model with driver figure and cockpit detail.

It consists of 64 Parts with 128 Decorations representing 28 Mask sprays, 33 Tampon prints 45 Decals 22 Free sprays and are. Minichamps has the model car diecast zinc produced. A highlight are the Bridgestone tires which are mounted on the correct scale replica OZ-rims. The car took in the year the gain of 1. Konstukteurstitels Red Bull 9 wins from 19 starts, managed 15 Poles, 700 laps over 3484.111 kilometers and 6 fastest laps and 20 podium finishes. This must be the Ferrari SF16-H, this year's official car of Sebastian Vettel, once provide. We express Ferrari and Vettel to the thumb and wish you a lot of fun looking at the congratulatory videos of the team.