Bburago brings with the kit for mid-size SUV, a model car 1:24 scale, which makes you think. 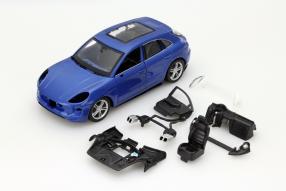 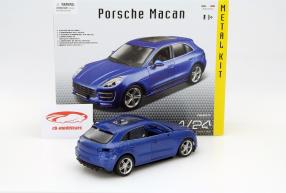 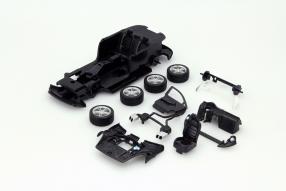 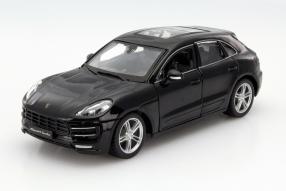 Furniture for self-assembly are a good idea in the minds of many fathers and singles on the way in the first home of their own, at least since the founding of IKEA. Saves a lot of money for those who buy thier shelves and tables in the Swedish furniture store and composed at home itself. Okay, sometimes its annoying with missing screws, incomprehensible written blueprints or even the masses of people, behind which you have to queue at the cash - but it is undisputed that an apartment for little money can be designed quite pretty. The self-assembly of models to ships, aircraft and cars is also something that many of us know since the days of her childhood.

Current Macan now as a kit


I remember very well to have my first Jumbo Jet assembled. The kit forming a Boeing 747-100, which celebrated its first flight on February 09 1969th My father wanted to give necessarily a kit for this milestone in aviation me before Christmas of the following year, but every model kits with the decorations for Lufthansa were sold out. For me, a jumbo jet in the Livery of BOAC remained whose mounting a lot of fun, their paint me but prepared less fun. Sprays do not require the model kits from Bburago. The rich tradition label from Italy presented now his Metal Kit for Porsche Macan 1:24 scale before, its body is made of painted die-cast zinc already in color Sapphire Blue Metallic.

Save money, however, this is does not: The same model is available for the same 14.95 euro also ready to buy. Moment - more work and the model assembling even for the same amount of money? Yes why not? Because it makes a lot of fun to put together the precise processed parts into a miniature. Apart from that you learn to understand the way a car model is mounted and which modules were manufactured and how. Because of the nature of the items get the Fertigmodell buyers even with nothing. For example, in the spotlights, their clear glass covers are connected by a long Connector: Ultimately, it's a big component which is poured and from which only the two end pieces at the end of - the headlight lenses - are to be seen.

Idea also for the latest news?


What applies to the reflectors of lamps: Both sides on a component. Taillights, interior door panels, dashboard, the seats, the exhaust system and the engine are the Metal Kit with in the form of many items and give the collector as a chance to get to know the model and its structure. The three-dimensional plate to simulate the engine is also running in three colors. The exterior mirrors, all the wheels and the radiator grille are also to mount. And why stimulates henceforth to think? Because it would be a nice idea to be able to buy the top innovations in 1:18 scale as a kit; maybe calculates something cheaper, but even without the discount bond between collectors and model safe reinforcing.