19.12.2022A great moment in German rallying – the 1972 Olympic Rally on the occasion of the Summer Olympics in Munich 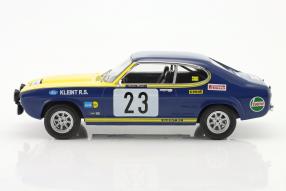 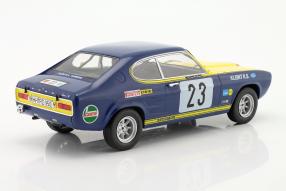 The idea of the organizer of the Olympia-Rally 1972 was to find a route of about 3000 km, which connects the two competition venues Munich and Kiel, where the sailing compeitions took place. As is well known, this distance is only about 700km as the crow flies. Even driving by car you can travel a maximum of 900km. For this reason, well-known special stages in the west and south-east of the Federal Republic of Germany were quickly connected with each other in order to increase the distance. The label Modelcar Group lets the Ford Capri MK1, with which rally legend Walter Röhrl and Hannes Rothfuss took part in the event, shine in new splendor on a scale of 1:18. The model is in no way inferior to the original and offers fans of rallying the opportunity to place a piece of history on a scale of 1:18 at home. Namely the vehicle that gave Walter Röhrl the start of his professional career.

The final route of the Olympic Rally ran from Kiel along the inner-German border in the direction of the Nürburgring and initially ended with the first and only overnight stop in Rüsselsheim in Hesse. Up to this stop, the participants had already covered 1400km and completed 23 of the planned 67 special stages. Then we continued east to Marktredwitz, the hometown of the Olympic Rally Organization Manager Hans Schwägerl. This was followed by a section along the zone border and the border with Austria. In Berchtesgaden, the participants passed the southernmost point of the route before they were able to reach the finish in the Olympic Park in Munich after 3371km and almost 100 hours of driving time. The rally was classified as a round of the European Rally Championship.

Since it was the highest category of this form of motorsport at the time, the Olympic Rally 1972 featured prominent figures. It was these celebrities who watched in amazement when the then 25-year-old, unknown boy from Regensburg named Walter Röhrl stole the show. And that with a car that at that time was better known for rural youth driving it to the disco at the weekend. Walter Röhrl started with his private Ford Capri and caused a stir from the start. The times he drove on the first special stage were canceled at the beginning as a “timekeeper error” because no official had thought them possible. It is said to have been a journalist who then said, "That's a madman from the Bavarian Forest. It really drives that fast”, was able to provide the necessary clarity. Unfortunately, the boy from Regensburg was not able to win the rally in the end because his engine blew up five stages before the finish in Munich. However, the 11 best times achieved up to this point brought him a professional contract and today mark the start of an inimitable career. The paths of Walter Röhrl and Christian Geistdörfer, his later co-driver with whom he was able to share all his great successes, first crossed paths in Munich in 1972. The then 19-year-old Geistdörfer, who was training as a bank clerk at the Hypobank in Munich at the time, was employed in the exchange office on the Olympic grounds for the time of the Olympic Games. He was therefore allowed to move freely on the site and was there live when the participants in the Olympic Rally looked towards the waved checkered flag.

The Olympic Rally 1972 remains the largest German rally event to this day. In 2022, a 50th anniversary revival of the event was staged, with 200 cars that covered the distance. Walter Röhrl, now 75 years old, was at the start again. 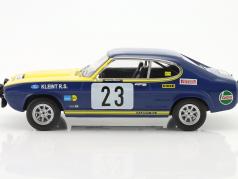 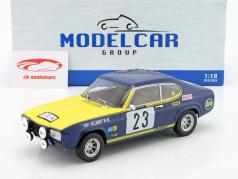