We present the closed version as well as the Targa in 1:18 from the label Schuco. 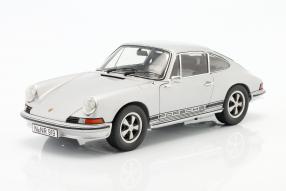 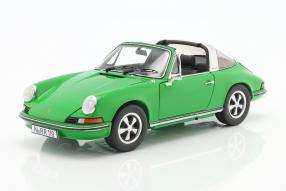 The label Schuco is known for its high quality and degree of detail. This can be also found in the models, presented in today's blog. What is meant is the Porsche 911 S, which the label Schuco produced in the closed version in silver as well as in the Targa version in Viper green. The two Zuffenhausen cars on a scale of 1:18 have a true-to-the-original interior that is in no way inferior to the original, as is the detailed engine compartment. Collectors can marvel at this, since the bonnet, the doors and the trunk of the models can be opened. The wheels of both models from Schuco are equipped with the popular Fuchs rims and can be steered on the front axle. As is usual with a Targa, the top of the Targa can also be removed from the Schuco model.

The G-model of the 911 (years of manufacture 1973-1989) is the first major facelift of the 911. The so-called original (Ur-) model was sent into well-deserved retirement and replaced by the G-model. When the prototype of the model copied from Schuco came onto the market in the early 1970s, the time was characterized by the desire for more safety, comfort and environmental compatibility. For example, the bumper of the 911, which seemed very strong by the standards of the time, had to withstand an impact at up to 8 kph without becoming permanently deformed. To this day, the higher bumper with the black plastic bellows is a feature of this 911 generation. Headrests were introduced in the 911, as were seat belts with automatic retractors. The front indicator lights were moved from the fender to the bumper and at the rear a continuous red reflective strip with the inscription "Porsche" was emblazoned between the taillights.

The base 911 was powered by a 2.7 liter boxer-engine and developed 150 hp. The power was increased up to 165 hp from the model year 1976. The 911 S even had 175 hp. The usual two triple carburetors were omitted and the mechanical 6-fold injection pump was replaced by the simpler K-Jetronic. The slightest change was made to the interior of the G-model compared to the original model. There was simply almost no noticeable change. Nevertheless, the electrically adjustable seats could be heated. The buyer could also choose electric windows for an extra charge. 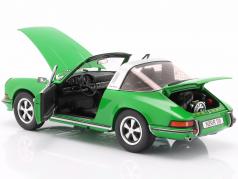 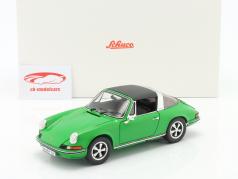 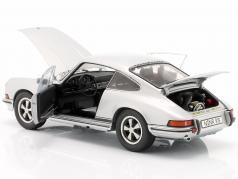 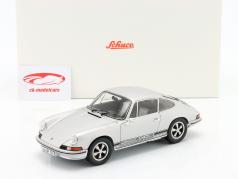