With the # 7 Bentley Motors unveiled the big Brummer in Goodwood-2013. True Scale Miniatures now brings the perfect model to do so. 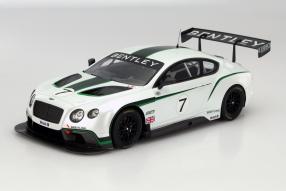 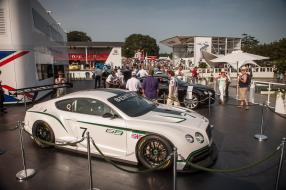 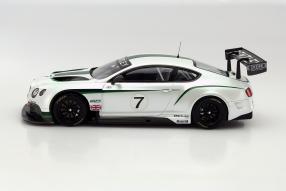 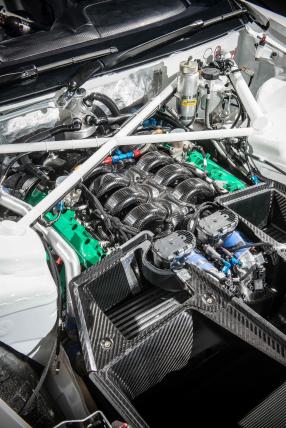 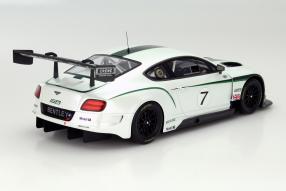 A small confession from the author of this blog: "Yes, I find big brummer great. Far from any cherished in journalism objectivity I take a position in that race car like the Audi V8 DTM or the Bentley Continental GT3 just for me more fun than the slender and tendrils! sports cars. "For those who share this passion for racing cars impressively occurring, for bringing the model AutoLabel True Scale Miniatures - short TSM - more great Bentley Continental in 1:18 scale in the trade; in various decors to race at various locations. Let's look representative of the total of 4 copies of the model to that Continental to which was unveiled at the Festival of Speed 2013: Premiere of the GT3 with starting number 7, to which we debut have found for you a relevant videos.

The premiere of the model to the model

Rolf Frech was a member of the Executive Board for Engineering and his time at Goodwood and introduced the Bentley Continental GT3 in person: "The Continental GT3 utilizes the incredible foundation that an infected under the skin every Continental GT However, we have more than 1,000 kilograms of weight removed. and the 4.0 liter V8 reconfigured. In the racing specification, it provides 441 kW or 600 hp. we have a comprehensive aerodynamics package designed to ensure that we can be competitive on the racetrack. "The biturbo engine received a dry sump lubrication and an offer tailored to the special requirements of motorsport engine management system. The power transmission to the rear wheels via a carbon-fiber propeller shaft to a sequential six-speed transmission with limited slip differential.

The differences from the production car

The scale in transaxle design concept ensures optimal weight distribution. It is shifted via paddles on the steering wheel. At the front and rear axles of the Bentley Continental GT3 is equipped each with a double wishbone suspension and four-way adjustable racing dampers, which replaces the air suspension of the road-going version. However, the steering has a hydraulic power assistance.

Braking with vented iron disks in combination with six-piston calipers at the front and four-piston calipers on the rear axle. While these features of the model there is little to see, the outer skin provides modelers a larger field of activity. To replicate the attached carbon fiber rear wing, they have given a lot of effort. Similarly, in the vast front apron and the other attachments.

Bentley has the GT3, the bonnet, bumpers, fenders and sill changed to optimize the coefficient of drag and to help engine cooling. The weight of the car has been pushed below the target of 1300 kilograms, ultimately, by the use of the latest techniques and advanced materials, so Bentley, and the removal of the leather and wood interior.

The vehicle was in a co-operation of specialists from the Bentley factory in Crewe and the technology partner M-Sport Ltd. developed and built. Official race debut the GT3 with the participation at the famous Goodwood Festival of Speed Hillclimb from Friday 12 July to Sunday 14 July 2013; 2 times a day piloted by Bentley Boy and 2003s-Le Mans Champion Guy Smith.

The model from TSM

True Scale Miniatures we have long known as a label for very detailed model and quality model cars with a focus on elite sports cars and luxury cars. But even when it comes to Formula 1 TSM has already asked Impressing on the wheels; so such as the McLaren by Gerhard Berger, on which we reported in the article can be accessed via this link.

The finish of the Bentley racing car is exceptionally good, the appearance of the models coincides perfectly with that of the design of the prototype and the attachments have been recreated with great attention. Full kudos So for the team members from Macao, but also a truly sophisticated licensor with Bentley; a license, incidentally, the same includes the manufacturing of Continental GT3 1:43. The models of this size are put of the highest quality and the collectors to really warmly.