11.02.2022A piece of German history in a double pack. Two cars that have left a lasting impression for decades

Volkswagen T1 Pick-up and Volkswagen Beetle 1303 in scale 1:18 by Solido 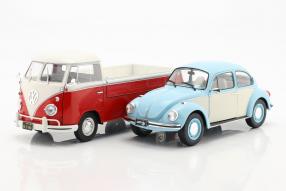 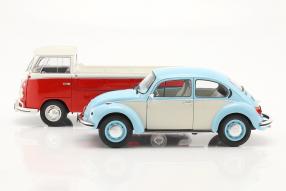 Two models come in a set from the label Solido that have had a lasting impact on automotive history to this day. The models produced from diecast are based on two classics with cult status from the house of VW. For no other car is VW better known worldwide than for the Beetle, which had a lasting impact on the company name when it first appeared as “Volkswagen”. In light blue and white, the 1303 is very friendly and, with its two-tone paintwork, fits in well with the set with the T1, which is also two-tone. The front wheels of the beetle can be steered and the doors can be opened. The T1 pick-up in red/white, which was also used as a reliable "carrier", is more of a leisure vehicle in this version. In addition to the front wheels that can also be steered, the tailgate can also be opened. A surfboard is included as a special eye-catcher, which, placed on the loading area, creates a bit of a holiday mood.

The Beetle got its name from the New York Times in 1938, which dared to compare it to the crawling animal of the same name in an article because of the many small cars that looked the same. Worldwide, over 21 million VW Beetles were produced. The production, which last took place in Mexico, was only completely stopped in 2003. The VW T1, which is also affectionately known as the Bulli, was the first model in the VW bus series that is still being produced today and is scheduled to continue in November 2021 with the seventh model in the series. To this day it is unclear whether the "Bulli" got its nickname from the adjective "bullig (German) / beefy" or whether the naming is a combination of the words "bus" and "Lieferwagen (German) delivery van". The T1 was produced by VW between 1950 and 1967 1.8 million times in a wide variety of versions and is considered a symbol of the German economic miracle. At that time, the price of a T1 was around DM 5850, around DM 150 (former German currency) more than the price of a fully equipped Beetle. Today, a T1 in good condition can quickly cost 15 times the original price.

In 1950, the T1 was powered by a 1100 ccm³ engine with 25 hp. Over the years the performance increased so that the last T1 in 1967 were equipped with a 1493 ccm³ engine that produced 44 hp and allowed a top speed of 110 kph. The VW T1 shaped entire generations. It was one of the first vehicles suitable for traveling and sleeping in the car at the beginning of the 1950s, a decade in which mass tourism was beginning to take off. In the decades that followed, the T1 was an integral part of the hippie movement. The VW T1 thus combines economic success with openness and diversity. Initially, VW installed a 4-cylinder boxer with 22 hp in the Beetle. In 1954 this was increased to 30 hp. In 1964 there was a further increase to 40 hp. 1970 marked the technical peak of the Beetle after further increases in engine performance. In addition to MacPherson struts, a 50 hp engine was also introduced. Today, the Beetle is considered the most popular classic car in the world. 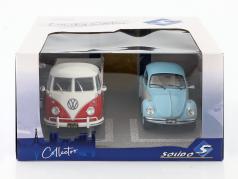 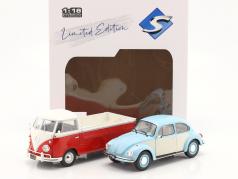