26.10.2021KÜS Team Bernhard and the weekend at the Hockenheimring as part of the ADAC GT Masters

Saturday ugh, Sunday hui. The weekend at the Hockenheimring was mixed for the KÜS Team Bernhard. 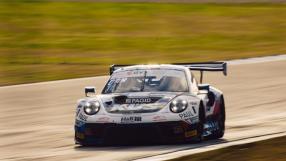 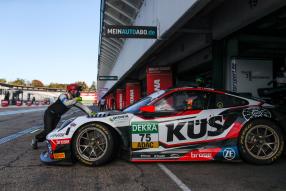 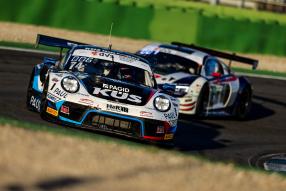 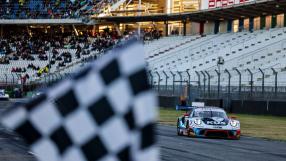 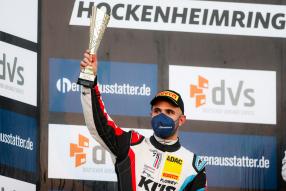 Just a consolation prize instead of top placement and proper points - this is the conclusion of the KÜS Team Bernhard after the Saturday race to the ADAC GT Masters in Hockenheim. In the Porsche 911 GT3 R with starting number 75, the reigning champion Christian Engelhart (34, Starnberg) and Porsche works driver Thomas Preining (22, Austria) achieved three championship points in the German GT championship. In the sister car with starting number 74, Dylan Pereira (24, Luxembourg) and Joel Eriksson (23, Sweden) were left empty-handed after a collision through no fault of their own.

# 75
Thomas Preining: “In terms of the car and the pace, we definitely had the potential to attack and make it onto the podium. I'm sorry for the team that it didn't work out today. But if I were again in the situation in which it turned me, I would do the same again. It always takes a bit of luck, unfortunately it wasn't on our side today. But we have such a good team, everyone works great together and the car is super fast. So I'm not worried that we won't get another chance tomorrow.

Sharp rubbed out on Sunday

In the Sunday race of the ADAC GT Masters at the Hockenheimring, the KÜS Team Bernhard celebrated a top championship result in the German GT-Championship: Christian Engelhart and Thomas Preining fought for fourth place in the Porsche 911 GT3 R with starting number 75, the sister car with starting number 74 under Dylan Pereira and Joel Eriksson completed the long-awaited success with sixth place.

Qualifying did not go optimally yet. After a top time was canceled because he had crossed the track, Thomas stayed in tenth place on the grid. Joel finished 15th after being handicapped on his fast lap. During the chaotic early stages of the race with two safety car phases, both of them stayed out of all the quarrels and still made up positions. At the beginning of the mandatory pit stops, Thomas was fifth, Joel was seventh. After the driver change, Christian was stuck behind a competitor for a long time, but fought him down with a remarkable maneuver shortly before the end of the race and took fourth place. Dylan didn’t mess up either, and won a position as well. The reward: sixth place in the overall classification and second place in the junior ranking.

# 75
Christian Engelhart: “From a worse starting position than yesterday, we got a strong result today. Thomas got off to a great start, made a great maneuver after the safety car and gained another position. At the pit stop we wanted to move forward with a different strategy, but we didn't succeed. That's why I was stuck behind a Mercedes. The car was very good, but it was very difficult to keep up with it. I just waited for the right moment and got fourth place for the team with a very good move. I am very grateful for the progress we have made. We got up after a couple of difficult races and I'm very proud of the team that we did it.

Team boss Timo Bernhard: "Just a beautiful day. Podium or victory would have been better of course, but I'm really happy that we have both cars at the very front with position four and six. It was a great team performance, all four pilots drove fantastic. This just makes me and the whole team happy."

[25.10.2021] A time travel through the era of Michael Schumacher in scale 1:43. From the first Grand-Prix participation to the successful time at Ferrari