The first hybrid sports car from Bologna was reduced into the format 1:43 by the small series label in two versions 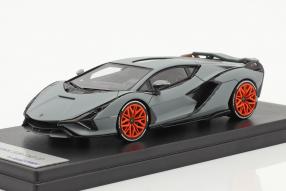 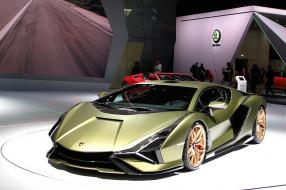 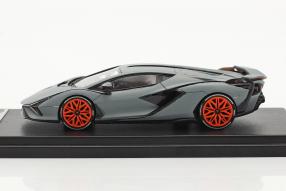 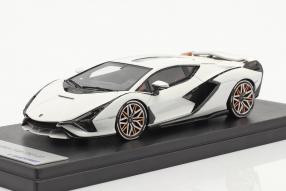 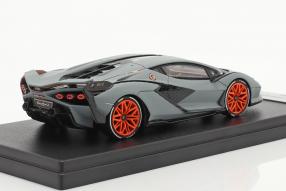 LookSmart has decided to reduce a real superstar of the IAA 2019 into 1:43 and presented two modelcars the week before the Monaco GP, which the editors of this blog want to hand over to you, dear readers, and at the same time recommend. These are the miniatures of the Lamborghini Sián FKP 37, which are available in monocerus white under item number LS507F and in matt grey with the beautiful name grigio egoista (LS507E). The people from Bologna, Italy, refer to a lightning bolt with the name Sián in their dialect, which they also use when it comes to fast cars. And that's why Lamborghini made the right choice when it came to the discussion of what name to christen the company's first V12 with hybrid drive plant. We take a closer look at this model.

The Lamborghini Sián FKP 37 of the model year 2020 was presented to the public for the first time on the 68th Inernational Automobil-Exhibiton (IAA) in Frankfurt am Main. Its naming needs some explanation beyond the lightning bolt: With the a additive FKP 37 behind the name, Lamborghini wants to remember the deceased Ferdinand Karl Piëch, who was chairman of the board of the Volkswagen AG between 1993 and 2002 and was then chairman of the supervisory board until 2015. Thus, his initials and year of birth can be found on the super sports car. On the other hand, the number of units in which the Sián is built is based on the founding year of Lamborghini: 63 units will leave the factory; The company was founded in 1963 by the tractor manufacturer Ferruccio Lamborghini. The brand is currently part of the Volkswagen Group: Audi bought it in 1988.

The Lamborghini Sián FKP 37 does not only attract attention because of its strikingly styled lines in the style of the house - which LookSmart, including all beads and edges, has perfectly transferred to the scale 1:43 - but also because of its hybrid drive plant. It consists of a twelve-cylinder with 6.5 liters displacement from the Lamborghini Aventador and the electric motor built into the transmission. The V12 develops 577 kW / 785 hp; the electric drive delivers 25 kW / 34 hp. 34 hp? Yes, that's how powerful a Volkswagen Beetle once was, with which whole families went on vacation across the Alps to Italy. But back to the Sián FKP 37: Its system output is therefore 602 kW / 819 hp. The maximum torque of the V12 is 720 Newton meters (Nm), that of the electric motor is 38 Nm. The vehicle is also faster than 350 kilometers per hour thanks to its all-wheel drive.

The Sián FKP 37 accelerates to 100 in less than 2.8 seconds. Its electrical energy is not stored in batteries, but in a super capacitor. But what is it? We quote: "Compared to batteries of the same weight, supercapacitors only have about 10 percent of their energy density, but their power density is about 10 to 100 times as high. Supercapacitors can therefore be charged and discharged much faster. They also withstand a great deal more switching cycles than rechargeable batteries and are therefore suitable as their replacement or supplement when a high switching load is required." The same high-tech standards are also met by the modelcars from LookSmart, which are convincing in the finish of the details both in the exterior and in the interior: From our point of view, these modelcars of the Lamborghini Sián FKP 37 2019 should not be missing in any collection of super sports cars.

Here: Click to the modelcars of the Lamborghini Sián FKP 37 2019