Spark now delivered the modelcars in scale 1:18 and each limited to 1,000 pieces after their role models of the Porsche GT-Team 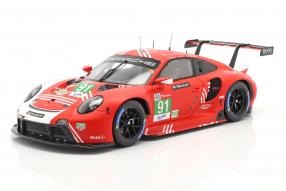 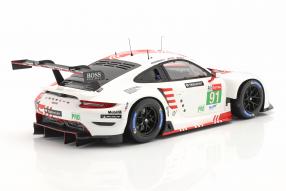 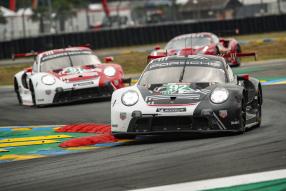 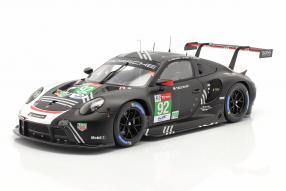 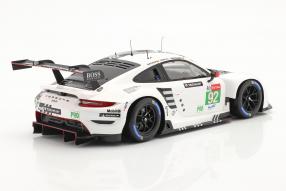 One size larger, please! A wish that not only the salespeople in the fashion industry hear from customers in the locker room, but which also often occurs within the modelcar scene: After Spark presented the modelcars of the Porsche 911 RSR of the Porsche GT-Team to the 24 Hour race of Le Mans 2020 at the beginning delivered in scale 1:43, now it's the turn of the miniatures in format 1:18. Limited to 1,000 pieces each and in the factory packaging from Porsche including a high quality display case, the race cars from Richard Lietz, Gianmaria Bruni and Frédéric Makowiecki with the starting number 91 with the item number WAP0219030MLEM are now available. The model, which appears in red and black according to the prototype, goes well with the issue with the starting number 92, driven by Michael Christensen, Kevin Estre and Laurens Vanthoor.

The black-and-white version with the item number WAP0219040MLEM also replicates the model in a perfectly crafted way: Made from high quality polyurethane cast resin and perfectly match the appearance and the lines. Let's look back: Porsche started the 88th edition of the 24 Hours of Le Mans on September 19th and 20th with special vehicle designs: The two 911 RSRs of the Porsche GT Team competed in the highly competitive GTE Pro category and rolled to the start in red-white and black-and-white - a tribute to the first of 19 overall victories at the 24 Hours of Le Mans, 50 years ago. The two approximately 378 kW / 515 hp works cars have the 1970 logo on the front hood and roof and are reminiscent of Porsche's first overall victory at Le Mans.

In that year, the Briton Richard Attwood and the German Hans Herrmann sat at the wheel of the legendary Porsche 917. The vehicle with the name of Porsche KG Salzburg was adorned with Austria's national colors. Exactly these were also used at the 911 RSR with the starting number 91. And that's why this red and white can also be found in the modelcars for this vehicle: The model achieved 31st place in the overall ranking. In the case of the sister car with starting number 92, the red was replaced by black in the original, as in the model: In the end, it was only counted in 35th place in the overall standings. A lot of bad luck was responsible, the power steering left the team in the lurch after just five hours. Further repairs made the backlog grow: In the end, the No. 92 came in sixth place in the class.

The sister car with starting number 91 finished one position further forward at the 24 Hours of Le Mans 2020. It was able to keep up with the leaders until early Sunday morning, but then an electrical fault put an end to all dreams of a place on the podium. The next edition of the 24 Hours of Le Mans is planned for June 12th and 13th, 2021: Back on the traditional date in summer, while last year's race had to be postponed to autumn due to the corona pandemic. Porsche has already confirmed the participation of the two vehicles for the event in the Le Mans and has got off to a very good start in this WEC season. Factory drivers Kévin Estre and Neel Jani won the season opener of the FIA World Endurance Championship in Spa-Francorchamps on May 1st, 2021 in the GTE-Pro class!