23.11.2015Winter Sale with lots of great model cars from Minichamps

Minichamps clean out their warehouse and the fans of high-quality miniatures benefit. A look at the highlights of the sales deal. 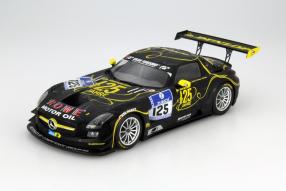 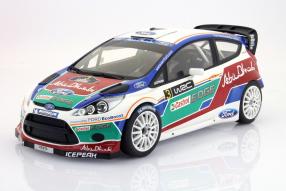 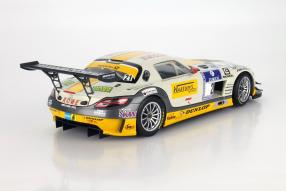 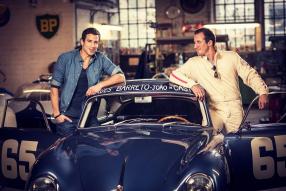 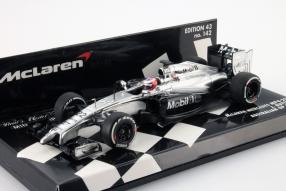 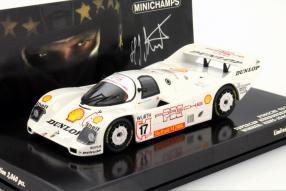 Highlights? Okay,  each Minichamps model car is a highlight, because the finish of its decorations, the conformity of appearance between miniature and prototype and the quality of workmanship of paint components and the team from Aachen has set standards. For the still very numerous appearing novelties Minichamps required storage capacity. The fans have somethingto look forward to, because this kind Clearance allows them to be able to completed their collections at unmatched prices. While journalists objectivity are obliged blogger may well shine through in their contributions their personal views. That's why the first glance is the offer of my all-time favorite sports car, the Mercedes-Benz SLS AMG GT3 and its various models.

The versions of the SLS AMG GT3 from racing

The model cars to the models of the Gullwing used in motorsports do not belong to the bargain; their sale prices start at around 84.95 euros. Therefore, the winter sales for fans of the SLS AMG is a genuine pre-Christmas present. For example, the cool, elegant black SLS team from Rowe Racing in 1:18 scale, of the patrol car, the driver toe, Bullitt, Renger and Hartung as role models in the Nürburgring 24 Hours in 2013, was limited to 1,000 pieces and the Article number 151133125 can be bought for fabulous 39.95 euros now. The look of the model refers to the former, 125th anniversary of the tire manufacturer Dunlop, which is also reflected in the launch of the model number. This is, incidentally, went into production in 2011; the 6.3-liter V8 front-mid engine with dry sump lubrication provides 400 kW / 544 hp.

From this breath taking prototype, there are other cool models: From the same team, but in the white-yellow of the Nürburgring 24 Hours 2013, the starting numbers 21 and 23, for example; the small splinter left and right at the bow, the front spoiler, which also very delicate replica as in the other SLS AMG GT3 carrier of the rear wing - these are details that can melt the heart of the chronicler (151 133 121, 151 133 123).

By the way: At the wheel of the # 23 was sitting among others Lance David Arnold, the lot of you safe "mobile auto" know as a test driver of, the car magazine on VOX. This, incidentally, does not remain the only magazine of its kind in the RTL Group, since 2016 to start a German version of "Top Gear" with Panagiota Petridou as one of the two presenters. Do not worry, this blog keeps you up to date to.

Winners at a bargain price

For 39.95 instead of 74.95 Euro the small Arnold could therefore einparken with you at home. For such a little money there is not even otherwise a 1: 43er. But under the article number 151133109 of the SLS AMG GT3 of Team Black Falcon driver Bernd Schneider, Jeroen Bleekemolen, Sean Edwards and Nicki Thiim is the winner of the 24-hour race Nürburgring 2013 available for only 49.95 Euro.

For the same price as the SLS AMG GT3 of All-Inkl.com Munnich Motorsport and the driver pairing Marc Basseng and Markus Winkelhock, the world champion FIA GT1 in 2012 (151 123 138). When were winners ever to snatch so cheap? Finally, I would like to mention the beautiful SLS AMG GT3 of the Dubai 24 Hours and the 12 Hours of Abu Dhabi, which are delivered with 44 percent discount and color accents in each showcase.

Discounts of up to 64 percent


Even higher is the discount on all model cars in 1:43 scale, which have been prepared in accordance with the models Porsche 962 PDK and Audi V8 quattro DTM. Hans-Joachim Stuck won the Porsche Supercup Nürburgring 1987 the model is to 2,060 copies limited (444 876 817). It appeared in the same number of pieces just in the packaging of the stucco collection, such as the Audi V8 with the starting number 44; the legend, the 1990 DTM won - in the car has competed for the first time in the same season.

Fans will be able to secure this top notch great car models for each 19.95 euros, ie in the case of the Porsche with 64 percent and the Audis with 62 percent discount. As gently suggests many gaps in the collection budget. Yes, the Winter Sale so really worth it. In the same order of magnitude lower, the prices of many Formula 1 cars are 1:18 and 1:43 - You look so pure in this link achievable total list.

And, by the way: ck-model cars is represented from 27 November to 06 December 2015 to the Essen Motor Show, bringing a real formula one car, the Jordan EJ11.