The fourth champion from CMR: With the modelcars in scale 1:43, the young brand won the readers&#039; election in the category Collecting category D large series classic 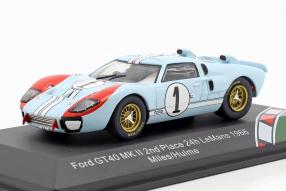 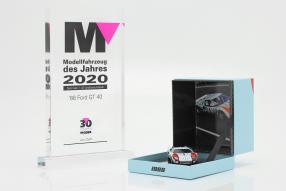 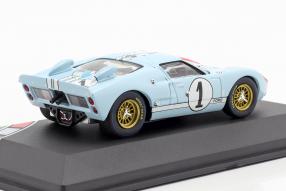 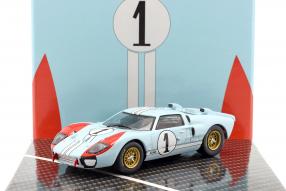 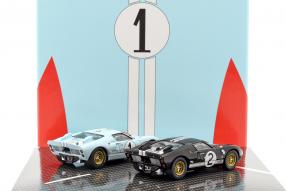 Motorsport is big cinema - usually! Eager readers of our blog will know this sentence from our articles about the Ford GT40. We have already published numerous articles on the modelcars from Spark or Shelby Collectibles, because the feature film “Le Mans 66 - Ford v Ferrari”, directed by director James Mangold in 2019, has sparked interest in these miniatures. But the Ford GT40 Mk. II from 1966 has not yet become a hero in any of the articles - but this is different now: The modelcars that the label CMR, which was founded only five years ago, are building for this racing car were popular with the readers of the trade magazine Modellfahrzeug as the winner in the category D large series classic 1:43! Congratulations! We recently welcomed the comparatively new versions in the splendid collector's boxes on the blog.

The Ford GT40 of the Shelby-American Inc. team with starting numbers 2 and 1, i.e. the winning car with Bruce McLaren and Chris Amon as well as Ken Miles and Denis Hulme at the wheel, was delivered by CMR in a representative presentation box in the blue of sponsor Gulf, which appeared three weeks ago under item number 4305455BOX. Those among the collectors who have already ordered these can look forward to owning award-winning modelcars. For the fans, however, who want to focus just on the winner of the hearts of Le Mans 1966 - Ken Miles on No. 2 - CMR offers the same box under item number 43055BOX, but only equipped with this model. By the way, both boxes are exclusively available at ck-modelcars.de! Let's take another look at the background of the diecast miniatures.

The movie “Le Mans 66 - Ford v Ferrari” picks up on the rivalry between Ford and Ferrari for victory in the legendary endurance race in the 1960s and ultimately tells the story of how the Ford GT40 came into being. The 34th edition of the endurance race, held on June 18th and 19th, 1966, ended very dramatically: Ken Miles on No. 2 looked the sure winner after a superior race to the finish line, but had to defeat the McLaren / Amon pairing give. It was the closest finish ever at the Sarthe: Both Fords had achieved the same average speed of 210.795 kilometers per hour. Since the McLaren / Amon car was 40 yards, i.e. about 36.6 meters, behind Miles and Hulme's GT40 on the grid, 25 yards decided between victory and defeat.

This small additional distance was the crucial factor in declaring Ken Miles one of the most unlucky runner-ups at Le Mans to ever cross the finish line there. The process of arrival is also the dramatic climax of the movie. The modelcars from CMR perfectly replicate the prototypes in proportions and appearance and are also convincing in the details around the front apron and rear. Printing and coloring are perfect; the replica of the wheels with their central locking as well. In stock are not only the model cars for the front two seats, but also the red version with the starting number 3, which was driven by Dan Gurney and Jerry Grant (CMR43053), but beyond that the stocks are already exhausted. It means to be quick for those who are still missing one of these category M winners.