The first advertising models of the eleventh generation of the top model from the manufacturer from Stuttgart appeared in scale 1:18 and in onyx black metallic 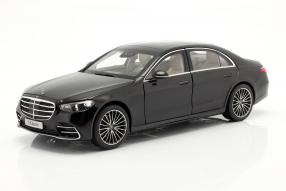 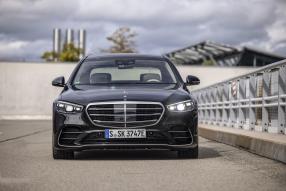 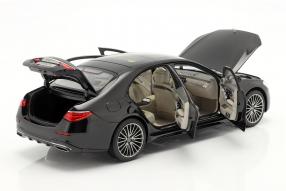 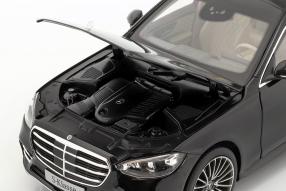 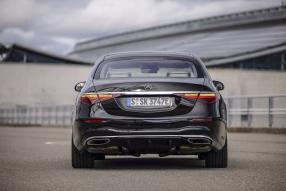 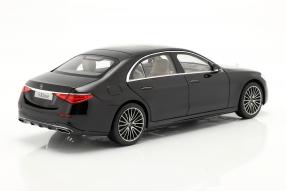 On November 2nd, 2020, the eleventh generation of the Mercedes-Benz S-Class was presented. The upper class limousine has always stood for the fascination of the brand and defines the luxury segment of the automobile; all competitors will have to be measured against it. The sedan, which is internally designated with the series number W223, offers a multitude of innovations designed to support the driver in their work behind the wheel. In addition, comfort features have been further developed, such as a new active ambient lighting, which is integrated into the driver assistance systems with around 250 LEDs and can visually support their warnings. The first modelcars for the new S-Class of the 2021 year appear in cooperation with Norev and in scale 1:18 in onyx black metallic with functional parts that can be operated all around.

The here presented miniatures, produced from diecast, exactly replicate the long version V223, of which the role model is longer with 5.289 meters than the base version with 5.179 meters, called W223. The modelcars measure 29.83 centimeters. Norev gives the models a complete set of equipment. In contrast to the Porsche 911 from the 992 series, the new S-Class has doors and hoods that can be opened all around. With the four entrances, a world of luxury opens up for the owners of the miniatures in which no detail is missing. The dashboard with the large control tablet, monitors and screens, the wooden trim, every switch, no matter how small, was perfectly transferred to the format 1:18. The trunk lid moves up; just like the bonnet, under which only black plastic panels can be seen under the prototype.

Norev gave these modelcars steerable front wheels. The new S-Class in 1:18 and the advertising packaging, typical for the brand, is going to come to the market also in hightech-silver in addition to the black version. In the size 1:43, the collectors can look forward to colors selenit grey and diamond white; In the format 1:87, which is ideal for model railways, the V223 in blue and white will enrich the showcases and dioramas. The French from Vaulx-en-Vaulin not far from Lyon have done a good job with the S-Class: Plastic parts such as headlights and glass roof or taillights nestle in the diecast body with excellent workmanship; the fit of the doors and hoods leaves little to be desired in terms of the gap dimensions. Our conclusion: A good start for perhaps the most important series in this segment in collector format.