Last weekend, the Englishman moved straight away with Michael Schumacher: The modelcars, a quick view on the still available ones and a novelty 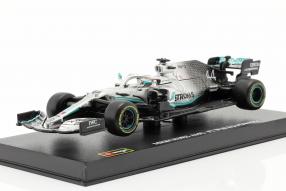 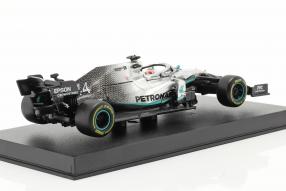 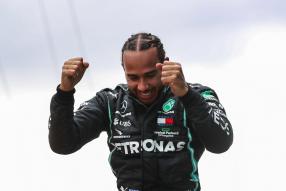 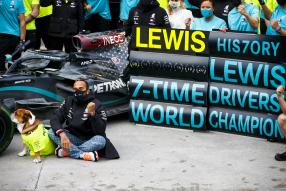 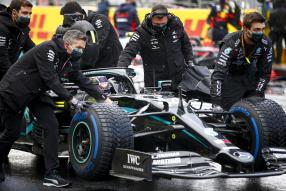 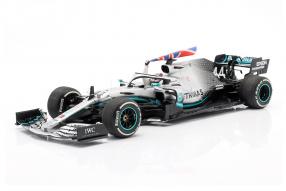 Seven titles, seven times world champion in the Formula 1, that is Lewis Hamilton: The Brit won the Grand Prix of Turkey last Sunday and thus secured his seventh driver title in the FIA Formula 1 world championship. With this he sets the current title-record that was originally set by Michael Schumacher. It was his 94th victory in the Formula 1 career, his tenth in this season and his second in Istanbul: Hamilton's account balance now shows 307 points, with which he leads the drivers' standings with 110 points ahead of Valtteri Bottas with 197 with only 78 points to be awarded! The Finn came in 14th after a race in difficult conditions. The Englishman, born on January 7th 1985, began his career like many of his colleagues in karting; 1993 at the age of eight. Here: A look at the modelcars that are still available for Hamilton.

The lately crowned world champion was accepted into the support program of the Formula 1 racing team McLaren in 1998. Hamilton won the Formula 3 Euro Series in 2005 and the GP2 Series in 2006. In 2007 he switched to Formula 1. From 2007 to 2012, Hamilton competed for McLaren. In his first year he was runner-up and in 2008 he was the youngest world champion in Formula 1 history. Since 2013, Hamilton has been competing in Formula 1 for the MercedesAMGF1 team. For this team he won six more world championship titles in 2014, 2015, 2017, 2018, 2019 and 2020, making him the record world champion with seven titles alongside Michael Schumacher. There is no doubt that Lewis has the eighth championship firmly in mind. For the 2019 title, affordable diecast modelcars in scale 1:43 were recently released by Bburago as a novelty.

These miniatures for the 2019 car version from Mercedes-AMG Petronas Motorsport are available under item number 18-38049 and exactly replicate Hamilton's racing car, which is correctly designated as Mercedes-AMG F1 W10 EQ Power +. The models available for the regular price of 19.95 euros can therefore be assessed as proper pocket money modelcars and of course also benefit from the 10 percent discount on the entire range for the duration of the winter sale. The special features of the models are quickly listed: a true-to-original cockpit replica, special packaging, a plexiglass hood, which is less common in this price segment, and a driver figure. But of course these are not the only miniatures still available on the subject of Lewis Hamilton, but the range of car models, especially in scale 1:18, is narrowing.

So ck-modelcars.de just offers three models in the aforementioned size: The Mercedes F1 W07 Hybrid from 2016 (18-18001) by Bburago as well as the Mercedes-AMG F1 W10 EQ Power+, limited to 618 units, in the design of the pole position of the German GP Hockenheim / Formula 1 world champion 2019 under item number 110191144 by Minichamps. Limited to just 302 pieces, this vehicle in 1:18 is also available for the British GP 2019 (110191044); both Minichamps miniatures are also built from diecast. Everything will be different in 2020: The fact that the modelcars of the W11 are lined up in black brings variety to the showcases. If you want to complete your collection for the record world champion from Formula 3 by then, we recommend a click on the link embedded here.

Here: Click to the modelcars to the topic Lewis Hamilton