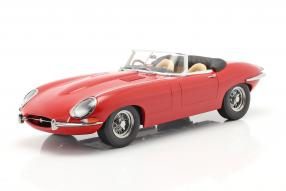 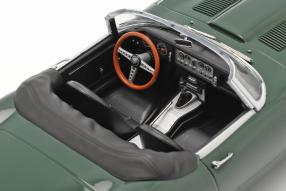 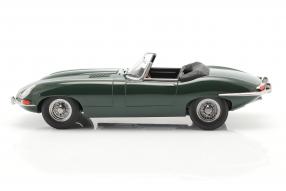 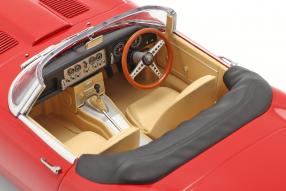 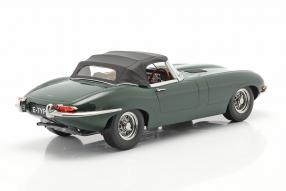 The two-seat sports car Jaguar E-Type counted to the dream cars in 1961. KK-Scale releases now four modelcars in the configuration of the model series I, which replicate the classic car in a way that can not be made any better. They are available in red and dark green; with right and left steering as well as open and closed designed fabric top. What impresses with the miniatures, is the quality of the details: Untypically starting at the rear, we first want to refer to the rear lights. It's small works of art with chrome edging and transparent red colored plastic inserts. In the second step, our eyes capture the wonderfully careful reproduction of the filigree spoke rims with its central lock. What these affordable modelcars in scale 1:18 else have to offer, we will show in the next coming lines.

KK-Scale did a smart decision with the role model, when they decided for the reproduction of the roadster that was presented for the first time in 1961 and developed by designer Malcolm Sayer. The never ending engine hood characterizes the image of the sports car until today and is now as well as about 60 years ago mega impressive. The modelcars, measuring 24 centimeters in length, offer their buyers harmonious curves and an appearance that is perfectly transferred to the model. The radiator grille insert and the front turn signals cannot be judged differently. The headlamp inserts at the front literally nestle into the diecast environment. Under the bonnet, the role model had a 3.8-liter straight-six with 198 kW / 269 hp. With its maximum rotation of 353 Newton meters (Nm), the Jaguar was to 100 in seven seconds.

With 241 kilometers per hour, the top speed was reached. The fact that the brakes became less effective with successive use - known as fading - was what customers accepted of the British, which was particularly popular in the USA because of its low price. There is nothing to be seen in the miniatures, each limited to 500 pieces, which also impress with their quality in the clearly visible interior. Main and additional instruments, the wooden steering wheel, soft paint on the seats and a crisp gear lever round off the good impression that the models make. KK-Scale has mixed the offer well: The label brings the dark green E-Type under item number KKDC180481 as an open left-hand drive, but shown closed as a right-hand drive (KKDC180483). The red version appears openly as a right-hand drive (KKDC180482).

With closed roof, the red modelcars as left-hand-steering (KKDC180484) are available. But KK-Scale did also dedicate itself to the coupes, which optically accelerate the heartbeat of the beholder even more. A click on the link embedded under this article leads our dear readers to the page in the shop where the miniatures of the closed bodies can be found. There are also versions of the convertible in scale 1:12, which the mold makers at Norev have chosen as a model for the models. All of the car models mentioned here benefit from the 10% winter sale valid at the time this article was published, which includes the entire product range of ck-modelcars.de. Which of course also favors the acquisition of the Jaguar E-Types.

Here: Click to the modelcars of the Jaguar E-Type