The sports car manufacturer from Stuttgart celebrates the champion title of the IMSA 2019 and the victory at the Petit Le Mans with very special modelcars in format 1:18 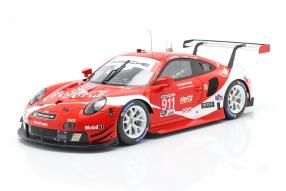 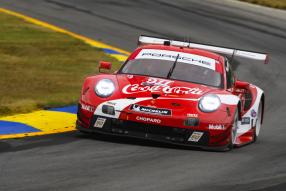 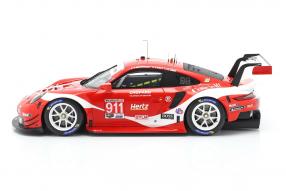 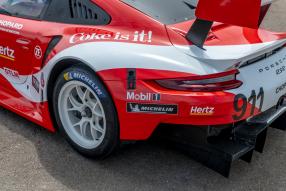 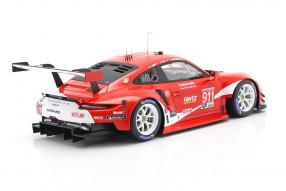 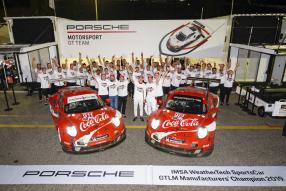 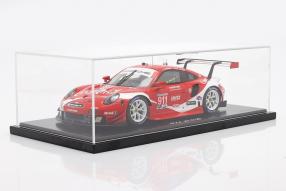 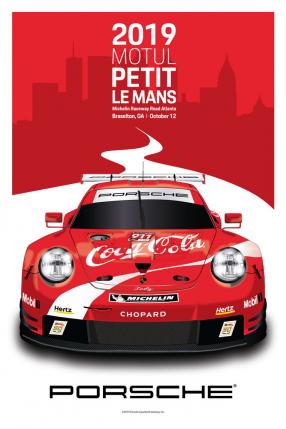 Spark received the license to reduce the miniatures of the Porsche 911 RSR of the Porsche GT Team into scale 1:18 to celebrate the championship of the IMSA 2019. The drivers Patrick Pilet, Nick Tandy and Frederic Makowiecki achieved the sixth place in the Petit Le Mans with the role model. The Porsche 911 RSR come in a strict limited edition of 1,000 pieces to the collector and are already sold out on part of the manufacturer. The nine-eleven in the design of the beverage brand Coca Cola were delivered in the advertising packaging typical of Porsche and provided with the item number WAP0219300MCCL. A showcase is included. The finish of the modelcars with the starting number 911, made from high-quality polyurethane cast resin, corresponds to the standard of the best quality at Spark. We look back on the road to this title!

13 wins, 34 podiums, title in the FIA World Endurance Championship and the IMSA WeatherTech SportsCar Series as well as triumphs at the big classic event in Le Mans, Sebring and on the road atlanta - this is the impressive balance sheet of the Porsche 911 RSR of the model year 2017 after its 50th and last factory use. The approximately 375 kW / 510 hp racing car according to the GTE regulations or the GTLM regulations in the USA goes down in the history of Porsche Motorsport as one of the most successful vehicles. We already had its successor in the blog: Click here for the article on the Porsche 911 RSR of the 2019 model year. But let's stay with the model of the Coca Cola Porsche modelcars. Porsche presented this 911 RSR, which is based on the high-performance 911 GT3 RS road sports car, at the Los Angeles Auto Show in autumn 2016.

The sports car manufacturer shows an uncompromising racing car and moves away from the traditional rear engine concept. "We have created space in the rear for the important diffuser through the positioning of the drive plant in front of the rear axle. It was also accompanied by an improvement in weight distribution. These factors not only made the car faster, but also ensured that tires were used optimally ”, explained Pascal Zurlinden, overall project manager for works motorsport. “The new concept was brave, but it absolutely paid off,” agreed Fritz Enzinger, Head of Porsche Motorsport. In the nine races of the FIA WEC in the 2017 debut season, the works drivers with starting numbers 91 and 92 achieved a total of nine podium positions: In the end, only eight points are missing to win the title.

Design of the legends in Le Mans

The Porsche 911 RSR then made its mark on the Super Season of the FIA WEC in 2018/2019: After a podium success at the start in Spa-Francorchamps, Belgium, Porsche will have the largest GT works outing in its history at the 2018 Le Mans 24 Hours . Four works cars competed in the classic event in France, two of them in historical designs. The cars in the decals based on the Rothmans look of the 1980s (start number 91) and in the Pink Pig design (number 92) immediately captured the hearts of fans. It is these two vehicles that also determine what happens on the track: At that time, Porsche took the lead in all GT championship classifications and never gave them up. On the way to winning the world championship, the Porsche 911 RSR also won the Japanese Fuji and the 1,000 miles in Sebring in the USA.

Let us stay in the USA: On January 28th / 29th, 2017, the then brand new Porsche 911 RSR faced the competition for the first time. The race premiere at the 24 Hours of Daytona ended with a second place. It was clear to all observers: the Porsche 911 RSR is a candidate for the title. This is underlined by the driver pairings Pilet / Werner and Vanthoor / Bruni in July 2017 with a double success in Lime Rock (USA) and by winning the North America Endurance Cup. In the 2018 season, victories in the great classics in Sebring and on Road Atlanta (Petit Le Mans) as well as in the sprint race in Mid-Ohio follow. The successes make it clear: The Porsche 911 RSR is now ripe for titles. And exactly these will follow in 2019. In the tough competitive environment of the GTLM class, Porsche succeeded in six victories of the season, including triumphs in the endurance classics at Watkins Glen and Sebring.

Including the spactacular sprints in the streets of Long Beach infront of the doors of Los Angeles, the Porsche GT Team celebrated five victories in a row - a new record in the GTLM-category. The crowning glory of a highly successful season is the final race of the successful 911 RSR at the Petit Le Mans in October 2019 in the historic design of the beverage giant Coca-Cola. With places five and six, Porsche confidently secured the manufacturers' and team titles. Earl Bamber (New Zealand) and Laurens Vanthoor defeat their factory driver colleagues Patrick Pilet and Nick Tandy (Great Britain) in a duel for the drivers' championship. The impressive overall record of the Porsche 911 RSR in the North American sports car series: ten wins and 15 podiums in 33 races. If that's not a reason to get one of these models.

Here: Click to the modelcars of the Coca-Cola 911 RSR