No, it&#039;s not a monoposto in the look of Sebastian Vettel&#039;s racing company car, but the modelcars to a thoroughbred street athlete 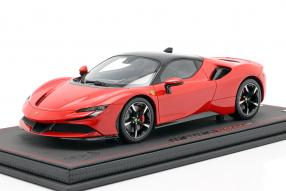 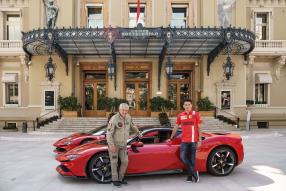 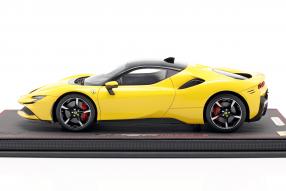 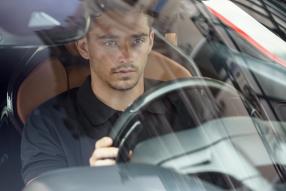 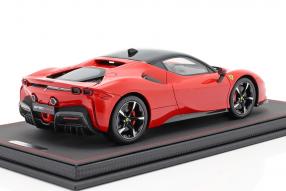 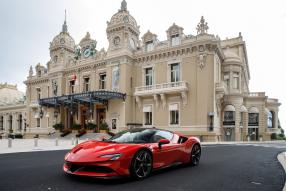 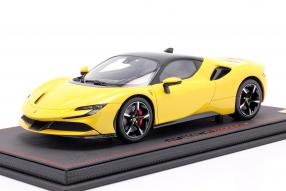 The Italians from BBR Models love the products of their compatriots from Modena and thus released two miniatures in scale 1:18, which make the hearts of the friends of sports cars beat faster: Modelcars to the Ferrari SF90 Stradale from the year 2019. The role model is the first Plug-In-Hybrid from the traditional house. Its name celebrates the 90th anniversary of the foundation of the racing team and, like the equivalent from the Formula 1 Scuderia Ferrari, abbreviates it in SF. BBR Models limited the version in corsa red to 449 units under the item number P18180A; in modena yellow, it comes in an edition of 149 units under P18180B to the collector. In both versions, BBR Models decided to produce from polyurethan cast resin as the main material: The exterior looks handcrafted first class.

Something that is expected of course at the price of these exclusive miniatures. The data of the super sports car can also be read exclusively, the role model of our modelcars: A 4.0 liter V8 with turbocharging is under the hood. It originally comes from the Ferrari 488, but delivers 574 kW / 780 hp in the SF90 Stradale and a maximum torque of 800 Newton meters (Nm) to the all-wheel drive via an eight-speed dual clutch transmission. But the turbo is not the only helper to drive up the performance values such as the driver's heart rate: Ferrari has also installed three electric motors, which contribute a total of 162 kW / 220 hp to the system output, which results 735 kW / 1000 hp. The SF90 Stradale accelerates to 100 km / h in 2.5 seconds; it takes 6.7 seconds to 200.

The top speed as given with 340 kilometers per hour by Ferrari. According to the factory, he is brought from 100 kilometers per hour to a standstill within 30 meters. He is already a winner and film star: The Ferrari SF90 Stradale won the iF Design Gold Award and the Red Dot Award in the Product Design category. In addition, the French director Claude Lelouch made his short film "Le Grand Rendez-vous" in the Principality of Monaco at dawn on May 24th, 2020; exactly on the day that this year's Grand Prix was to take place. The French director's cameras accompanied the Ferrari SF90 Stradale when Charles Leclerc completed an adrenaline-fueled lap on the Formula 1 street circuit and reached speeds of up to 240 kilometers per hour on the street circuit: One guy, no traffic!

HSH Prince Albert II of Monaco appeared briefly in this film. Ferrari chairman John Elkann, princes Andrea Casiraghi and Pierre Casiraghi with his wife, Princess Beatrice Borromeo, also visited the set. Thanks to a gradual lifting of the blockade in France and Monaco, the shoot was also watched by a group of enthusiastic spectators from the balconies and streets, which were carefully monitored by the local authorities. The film, published on June 13th, can be watched by the readers of this blog embedded above this article! We wish a lot of fun with the SF90 Stradale and Charles Leclerc as well as the really recommendable modelcars.