With two high quality diecast-modelcars in scale 1:18 the label reminds on the Camel Trophy: Land Rover 90 1985 and Range Rover 1981 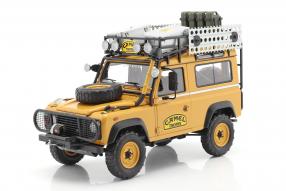 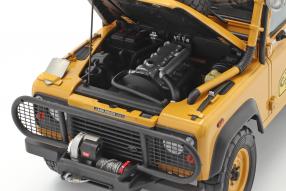 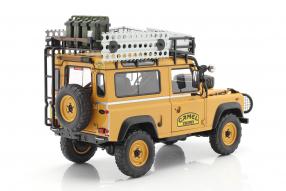 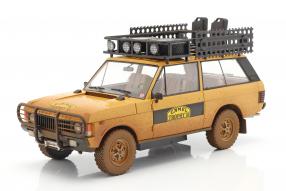 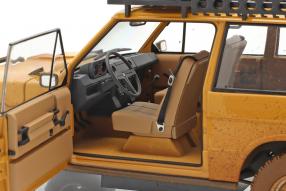 If there are modelcars, which we classify as typical for a manufacturer, then it is the miniatures of the Camel Trophy from Almost Real. The relatively new and fairly active label has extended its previous range of replicas of participants of this legendary event with the models of the Land Rover 90 to the Camel Trophy Borneo 1985 under the item number ALM810213 as well as with the Range Rover of the Camel Trophy Sumatra 1981 in a so-called dirty version under the item number ALM810111, which again come up with a variety of striking details. The miniatures are produced from diecast and are fully equipped with the attachments for the rally use as well as with all around openable doors and hoods, which elect the models to proper eye catchers in every showcase and awaken the disire for the really big adventure!

Starting with the year 1981: The Camel Trophy from 1981 took place in Sumatra and led five teams from Germany - including a women's team for the first time - over 1,600 km from Medan to Jambi. The used Range Rover reflected the classic variant of the off-road vehicle suitable for road use and had a 3.5 liter big V8 with 93 kW / 126 hp, which was installed since the production begin in 1970 until October 1985 in the three-door version. Almost Real considered the details of the drive plant very well: Under the widely openable front hood the motor, cables and lines have been skillfully converted into the model. The moldmakers have completely taken up the add-on parts that are indispensable for rally use and added them to the model, which in its appearance corresponds exactly to the lines of the prototypes.

The workmanship of the dashboards, the seat belts and the replica of the gas lift of the tailgate with its two wings is also remarkable. The loamy outfit rounds off the appearance of the models in an authentic way. Almost Real does not include this detail in the downsizing of the Land Rover 90 from 1985, but that diminishes the attractiveness of these modelcars in no way. Like the Range Rover, the 90 offers true-to-original interior equipment, an equally detailed engine compartment, steerable front wheels and all-round opening doors. The role model for these miniatures is the fourth series of the Land Rover, which is implemented here in the shortest version in the scale 1:18: upgraded with cable winch, roof rack and additional headlights.

What was the Camel Trophy?

The Camel Trophy was an invention of the advertising agency team / BBDO from Düsseldorf and a kind of rally raid with expedition character; founded by the cigarette brand Camel in 1980 and implemented annually in another country. 1985 it was the turn of Borneo: 16 teams drove from Samarinda to Balikapan. The idea was developed by its author Thomas Wulfes. The "limitless adventures", so the advertisement, led the participants through technically difficult terrain; mostly in jungle regions. It was not only about the skill with the off-road vehicles provided by the organizer, but also about team spirit, technical improvisation and the endurance of the participants. If one sniffs the models, you can literally smell the scent of the adventure that was finally discontinued in 2000.