A limited set of diecast models equipped with two Ferrari 126CK in scale 1:43 comes to the collector and reminds on the first season of the Formula 1 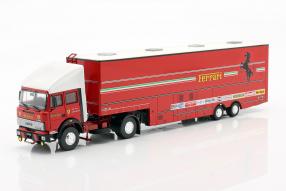 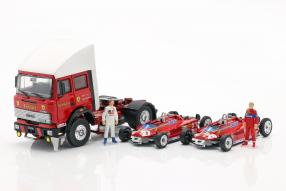 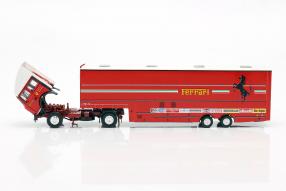 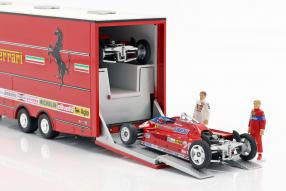 1981 - what a year: It was the year of the first Formula 1 World Championship, which was also called like that and the year in which the first concorde-agreement was concluded. With this agreement, which put the end of the previous years of disputes regarding the distribution of income from the marketing of Formula 1 and the regulations, the premier class of motorsport got its new name, under which it is still held today. But we still stay a little bit in 1981, because at that time the Scuderia Ferrari relied on a racing transporter that drove as a Fiat Iveco 190 tractor unit to the racetracks in Europe. The traditional label Brumm has released modelcars for this vehicle, which comes to the collector in a set with two Ferrari 126CK.

"Brumm - automodelli Italiani al 100 %", that's what the title of the website of the Italian modelcar manufacturer says, which has been committed to the miniatures of the tradidional racing team from Maranello since 1972 like no other label. The modelcars built from diecast inspire on the one hand with an excellent quality in detailing and processing as well as with reasonable prices compared to the competition on the other hand. Brumm, however, concentrates more on the history of the Scuderia Ferrari, less on the current racing cars from Sebastian Vettel & Co. However, this also means that the big and sonorous names from the history of the Reds have their home at Brumm: Gilles Villeneuve and Didier Pironi, for example, are the two racing drivers who can be found in the set of 50 pieces with the item number RTS09 .

On June 21st, 1981, everything went well for the Canadian Gilles Villeneuve, because at the end of the race at the Circuito del Jarama, he stood at the very top of the podium. He won the Grand Prix of Spain over the distance of 264.970 kilometers or 80 laps in hot summer weather and in front of about 40,000 spectators after 1:46:35.010 hours. Three weeks before that, he had also won the race of Monaco. Villeneuve trusted on the Ferrari 126CK with chassis No. 052, which already had the configuration B and offered a revised front car. The racing car designed by Antonio Tomaini was powered by a so-called Tipo 021 Turbo, a V6 with 447 kW / 608 hp in qualifying and 410 kW / 558 hp in the race. Problems with the handling of the 126CK and the susceptibility to defects of the engine reduced Villeneuve's chances of winning the title.

What is different abuot the ninth edition?

His teammate Didier Pironi landed on position 15 in Spain. It was the last use for our racing transporter at this track, because the Formula 1 withdrew from Jarama. Brumm is bringing modelcars to this vehicle for the ninth time. If you are wondering what differentiates this miniature from the previous ones, please note that the Scuderia Ferrari was equipped with an Iveco 170 tractor in 1981, but received the Iveco 190 during the season, which initially had a white spoiler over the cabin and got the sponsors of the current year painted on the transporter. These rare modelcars have a foldable cab, a functional loading flap in the rear and an interior of the trailer, in which the two 126CK with transport tires can be stored.

Here: Click to the Ferrari racing transporter from Brumm