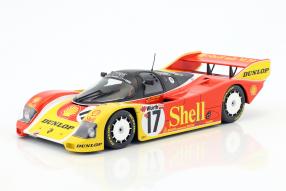 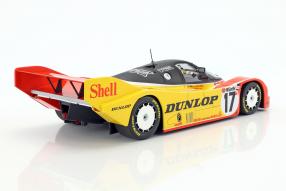 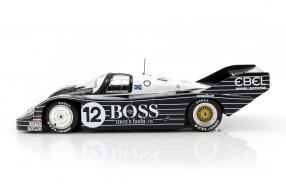 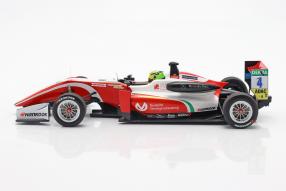 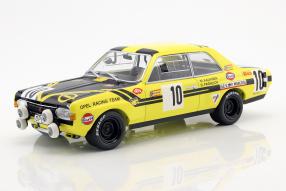 Many of you will have seen on our Instagram channel and Twitter account that our editorial staff advertised for a Minichamps-Sale. It is definitely worth it to take a closer look there: You as a collecter have the opportunity to snatch really extraordinary modelcars at fair prices. We open the corresponding landing page, which can be reached via the link embedded below, and highlight particularly attractive miniatures here. In the pole position are Porsche 956 KH and 962C, which Minichamps has released in scale 1:18 and remind us on unforgettable races, whose heroes were the role models of the miniatures made from. diecast: Come with us on a journey through time, which ends in a reasonably priced present!

Let's start with the No. 17, the Porsche 962C with this starting number, with which the driver legends Hans-Joachim Stuck and Derek Bell competed the 200 miles of Nuremberg of the year 1987. The orange-yellow car had competed at the 2.3 kilometer long Norisring among the advertisment of the Porsche AG and is available as a scale 1:18 model under item number 155876517 and limited to 504 units as part of this campaign. The race of June 28th, 1987, was part of the World Sports Car Championship and was split into two races: the first run ended with second place, the second run with an engine failure. The Porsche 962C was based on the Porsche 956 and was introduced in 1984. The regulations of the American IMSA racing series required, among other things, that the pedals must be placed behind the front axle. The 956 did not fulfill this: The 962 was born.

If the 962 is equipped with technology compatible with the FIA Group C and can also be used there, the model designation is supplemented by the C. The six-cylinder boxer engine with only one turbocharger at the IMSA produced 500 kW / 680 hp from the 2.9 liter displacement. The racing car, which weighs around 850 kilograms, drives a top speed of around 400 kilometers per hour. The Porsche 956 KH, with a short tail, is more widely represented in the portfolio of our Minichamps-Sales: For example, in the hugely popular paintwork by the clothing manufacturer Hugo Boss. This was carried out by Kremer Racing, in the case of the model with the item number 155836612 also piloted at the 200 miles from Nuremberg, but in 1983 and by Formula 1 world champion Keke Rosberg. Its 2.65 liter six-cylinder biturbo engine produced 455 kW / 620 hp.

Whether for the 1000 kilometers from Monza 1984, the Bergischer Löwe Zolder 1983, the 1000 kilometers from Spa or those from Mugello of the same year - Minichamps has made really good modelcars for the Porsche 956, which are an attractive and now extremely inexpensive collection area even for late beginners. Fans of the Audi R8 LMS will be happy to have the opportunity to expand their starting field of the Ingolstadt mid-engine racing car and rare examples from the market in China. The friends of the unforgettable racing driver Stefan Bellof from Gießen have the opportunity to get the Tyrrell Ford 012 from the Tyrrell Racing Organization in the decoration of the Belgian Grand Prix of Formula 1, 1984 with the item number 117840304 significantly reduced. Did we promise you too much? A journey through time that pays off!