Minichamps delivered two more modelcars in scale 1:12 the week before Christmas, with which we want to draw your attention to this athlete 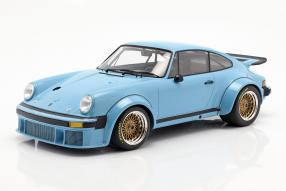 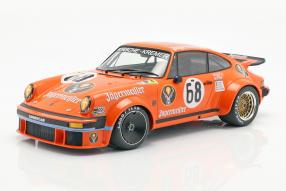 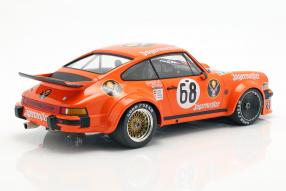 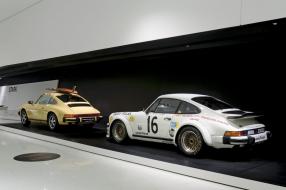 Two new modelcars - the follower of our channel on Twitter know this introduction - to the Porsche 934 appeared: A street version in minerva blue under the item number 125766407 as well as the racing car of the Team Hervé Poulain, with which the drivers Edgar Dören, Gerhard Holup, Herve Poulain himself as well as Roman Feitler started at the 24 Hours of Le Mans in the Jägermeister-design (125786468). The crew from Aachen presented with both Porsche 934 in large scale 1:12 the racing or GT-version of the 1974 introduced, first Porsche 930 Turbo. The shape of the rear spoiler is orientated on this, but the 934 looks much more martial thanks to the fender flares that are riveted to the prototype and are 50 mm wider. This racing version was used from 1976 and complies with Group 4 FIA regulations.

The main area of application for the Porsche 934 or Porsche Turbo RSR was the German Racing Championship DRM and the Sports Car Championship, but as our modelcar mentioned at the beginning shows, the Porsche 934 also took part at the 24 Hours of Le Mans between 1976 and 1982; in the USA also in the GT series of the IMSA. The original version on which our models are based made 357 kW / 485 hp with its six-cylinder boxer engine. The 3.0 liter was equipped with a turbocharger but two intercoolers. It was shifted by a four-speed manual transmission. The civilian version traces the changes between Series 930 and Sport 934 particularly strikingly. The most striking are the fender flares with the welt strips between the plastic part and body.

Minichamps gave the modelcars an absolutely coherent appearance and really gave successful replicas of the BBS aluminum rims on the way. The rubber bellows characterize the Porsche 930 as well as the 934 as a representative of the so-called G-model. This corresponds to the design of the dashboard, which is the only component reminiscent of the production version. In fact, the interior of the Porsche 934 was pretty bare, but at that time it could be ordered in all standard and special colors, provided that it was not a metallic paint. Minichamps has taken great care to reduce the ventilation above the rear window, the interior of the headlights and the look of the rear lights. According to the sports car, there is also an entry for the quick tank system in the front hood, the quick fasteners on the same as the smaller exterior mirror.

Also included in the interior: The mandatory roll bar. Both miniatures have steerable front wheels and are produced of zinc-die-cast. The label calls a weight to the Porsche 934 in 1:12 of anyhow two kilograms, estimates the lenght with 36 centimeters, the height with 10,8 as well as the width over all with 16,5 centimeters. A format, in which a modelcar excites just by itself on a desk or living room table, for those who don't have created a collection of modelcars. Just on thing: At the 46th edition of the 24 Hours of Le Mans 1978 the role model of our Porsche 934 with the starting number 61 unfortunately did not finish, which does not detract from the attractiveness of the model. With this in mind, the team of ck-modelcars.de including Luca and Jörg from the blog wishes you a Merry Christmas!